Along with nearly 70,000 fans in the stadium, Josh Atencio was rooting for Seattle Sounders FC to win. He lives in the area and loves the game, so of course he wanted another victory. The first time Seattle won MLS Cup was after Josh’s first year in the Academy. The 2019 win came after his first year as a professional.

“When we got our first win, it was really special for soccer in Seattle, but to finally have one played here in front of our fans, to be able to sit with the other Tacoma guys and watch that was unbelievable.” 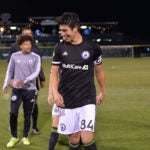 On Sunday November 10 he and those Defiance teammates were given a reminder of two things – the weight of expectations within the Sounders organization and that the whole of Puget Sound will support them as they strive towards those goals.

After that final whistle a handful of players with whom Atencio is quite familiar took the stage. Sounders Academy products like Jordan Morris, Handwalla Bwana, Danny Leyva, and Alfonso Ocampo-Chavez are MLS Cup winners. Championship rings are going out to Atencio’s Defiance teammates this year – Justin Dhillon, Alex Roldan, Bryan Meredith. The connections are numerous.

“It’s special to see all those guys who are on the same pathway as us. Those guys who are with us every single day – to be able to do that with the best team in the league that we are trying to get to is really special.”

A couple days after watching the 3-1 victory over Toronto in the stands at CenturyLink Field, Atencio had already watched the match again at home. This time he focused on the two players that can help him advance his game.

“I watched it again already at home. I tried to watch Gustav and Cristian and what impact that they had on the game. It’s important to look at every game, but a game like that when the stakes are so high I really want to learn from that.”

Svensson plays mostly as a defensive midfielder and has experience as a centerback. That role is something that the 17-year-old Atencio is trying to pick up. 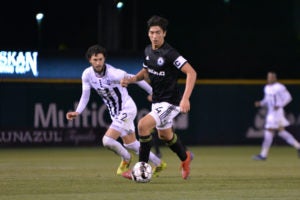 “The things he does are the things that every central midfielder needs. I remember one play in the Final, I think Victor’s goal, where he came out of nowhere and took the ball and then started the attack. Just two passes later Victor put the ball in the net. Things that he does are vital for what a guy like me needs to be doing. I try to watch that as much as I can.”

During the Defiance offseason the young captain will do a few things that normal teens do – hang out with friends, fill out college applications.

“I get to see my friends outside of soccer a lot; since I do online classes I have a lot of free time. I get to see those guys. It is humbling. It lets me feel how special the opportunities that I’ve been given are. To be doing this and getting paid to do this at such a young age – at the same time I have to find time to do things – earlier this morning I had to write my application essay for the University of Washington.”

He will also continue training as a soccer player, now with a strengthened ambition to pursue his dreams to make the First Team and help his hometown club win their third MLS Cup. His next goal is with Tacoma Defiance.

“It puts us in a position where we have the same expectations. It puts that same level of expectation on us and our teams throughout the system. This is a winning organization and we are here to play to win.”