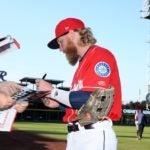 Second baseman Tim Lopes and outfielder Jake Fraley were recognized  by MiLB for their 2019 performances in Tacoma. The rest of the highlighted prospects could see time at Cheney Stadium in 2020 as they charge up through the team’s suddenly packed farm system. Seattle Mariners general manager Jerry Dipoto is likely to add a catcher to the Rainiers roster during the Winter Meetings.

How fast does time fly? Pitchers and catchers will be reporting in just over two months. While you plan your holiday and New Year’s parties take some time to lock down your calendar for February 12, as Spring Training begins. We hope you’re as excited as we are for R Opening Night at Cheney Stadium on April 9. 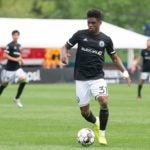 When it comes to his soccer career, Nick Hinds answered the only question that matters — he’s a left back. Able to shift through gears rapidly, Hinds has the acceleration and raw speed to change games. He is back with Tacoma Defiance in 2020 after earning a new contract. The Sounders Academy and Akron product is ready to race down the left side at Cheney Stadium.

Alec Diaz, Ray Serrano, and the rest of the Defiance players with the Sounders Academy dominated the Winter Cup. The Sounders U-19s went 2-1-0, +7. Diaz scored in every match with four total goals. Serrano netted three goals. Josh Atencio, Azriel Gonzalez, and Marlon Vargas also scored as they continue to grow with their eyes set on 2020 in ink black and Defiance green.

In their sixth trip to the CONCACAF Champions League, Seattle Sounders FC will face off against familiar foe CD Olimpia. The Sounders beat the Honduran side in their previous meeting. Seattle’s side of the bracket only features a single team from Mexico, so it projects as favorable as can be.

Los Angeles FC added Reno 1868 forward Danny Musovski to their roster. Musovski scored 11 goals with Reno. The 24-year-old will now try to follow in the footsteps of Justin Dhillon, turning a strong USL season into appearances with an MLS team.

Colorado Springs Switchbacks did more than break ground on their 8,000 seat stadium. They also updated their logo and colors to represent their community.

We found Santa and look forward to hosting him in Tacoma for your family photos at this year’s Downtown Tacoma Holiday Haul Crawl. Rhubarb, Epic Sax Gorilla, and Jack the Bear will all be hanging out with Santa from 12-4 PM at R Defiantly Tacoma Pop Up Shop at 938 Broadway. Your favorite Cheney Stadium DJ will also be spinning holiday hits inside our winter wonderland. Come say hello to your Cheney Stadium family from that make your stadium experience a special one during downtown Tacoma’s biggest holiday event of the season.

The Tacoma Team Store is open Monday through Saturday until Christmas from 11 a.m. to 5 p.m. and 24/7 online. Click here for Rainiers and here for Defiance.