Just over two months ago, Carole Ann and Jack McQuade of The Swiss were looking at their darkened rooms and wondering how to re-open the restaurant. Figuring out how to do that was a process. It meant shifting to takeout and giving up some of what makes The Swiss, The Swiss.

The couple also wanted to give back to a city that’s given them so much. When the Downtown Tacoma Partnership emailed about Hero Meals it was easy to say yes. The Swiss was already planning to follow the lead of Crisp Greens and find a way to help frontline and essential workers. 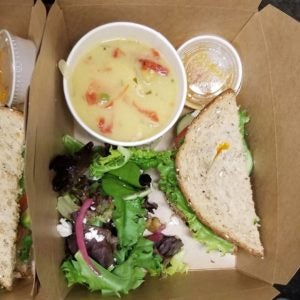 Hero Meals takes distribution out of the equation and lets the McQuades focus on what they do – food. Their hero meal is half of an in-house developed sandwich (the Mediterranean), salad with citrus dressing, and a rotating cup of soup. It all travels well, which was part of what Carole Ann and The Swiss head chef wanted as they designed the Hero Meals menu.

“We wanted to do something that represents us and provides them something healthy and tasty.”

Jack says that joining Hero Meals meant bringing their head chef back on payroll as the restaurant stays open for its 27th year.

“It helps keep the doors open.”

That’s because there are people in Tacoma and around the country supporting through Hero Meals. People from out-of-town don’t need take-out, but they can support their favorite restaurant-pub-art gallery-concert venue and the essential workers of the South Sound.

Through R Hat R City: Hero Meals, the Tacoma Rainiers and Tacoma Defiance are helping as well. The nine restaurants in the program will receive $5 from every hat purchased at the We R Tacoma Team Store. That money goes towards keeping the doors open and feeding grocers, postal workers, firefighters, police, and medical specialists. 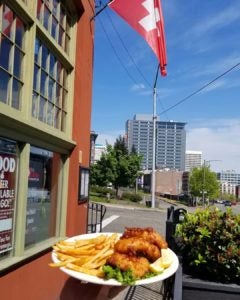 Carole Ann and Jack are happy to see their “second home; our additional child” stay open thanks to the support of Tacoma. This city rallies together. Carole Ann notes that it is important to recognize help locally and not just on national news and social media.

“In the last couple of months you’ve really seen this community – everybody – is trying to help each other out.”

What’s next? The Swiss doesn’t know. They know that they’re looking forward to seeing the loyal customers, with the Spazmatics on stage again, whenever that will be.

There will be many small steps along the way to get to that point again. The McQuades are talking to other restaurateurs and bars in Tacoma, the distributors, local breweries about how to open in the next phase that’s appropriate for the business. They also know that the community is going to help each other, because that’s what Tacoma does.

“We’re just grateful that everybody is trying to pull together and pull through this.”