On the surface, Seattle Sounders FC’s ties to Tacoma seem ultramodern. The bond between the MLS Cup qualifiers and Grit City has clearly grown in the last two years as Tacoma Defiance develops the future of the Rave Green at Cheney Stadium. Take a closer look however and you’ll find that Tacoma’s connections to the Western Conference Champions and their MLS Cup foe, Toronto FC, stretch back decades. Soccer in the South Sound helped build the 2019 Seattle Sounders side that returned to their third MLS Cup in four years. Fourteen Sounders FC players took the field at Cheney Stadium in 2019, but our city’s link traces much further back into history than that.

When the 2019 MLS and USL Championship season started, Justin Dhillon, Danny Leyva, and Alfonso Ocampo-Chavez all dreamed of earning MLS contracts and eventually helping a side to the Cup. Those dreams accelerated as all three claimed their Rave Green shirts.

The three former Defiance men started a combined eight matches and played in 14 games for a total of 759 minutes in the MLS season. They contributed to Seattle’s second place finish in the West after starting the campaign in Tacoma. With Defiance, the trio scored 19 goals and assisted four times in 3,959 minutes. 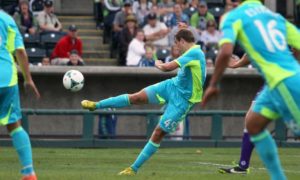 Back in 2013, soccer in Cheney Stadium was an idea, rather than a reality – right up until the Sounders Reserves took on Orlando City, then in the USL. Taking the field for Seattle that day? Former Sounder and Defiance player Henry Wingo, then-Academy star Jordan Morris, and now Toronto FC centerback Eriq Zavaleta. Zavaleta has yet to appear in TFC’s 2019 postseason, but did start and play 120 minutes in their 2016 loss to the Sounders. Morris played 108 minutes in the 2016 victory and 19 minutes in the 2017 loss. In this year’s playoffs, Jordan Morris has 2 goals in his 185 minutes of play.

The deepest roots of this MLS Cup’s Tacoma connections stretch back to the 1980’s roofed era of soccer. Preki, Toronto FC head coach in 2010, and Sounders FC’s Brian Schmetzer both played professionally with the Tacoma Stars in their glory days. Preki became a soccer icon with Tacoma emblazoned on his chest while Schmetzer both played and coached for the old indoor soccer club.

Whether you are in the stadium with nearly 70,000 friends or watching at home know the Sounders on the pitch are working for Tacoma, Seattle, and Puget Sound.