Some South Sound runners climb the steps at the Museum of Glass. Others challenge themselves by summiting Tacoma’s iconic Stadium Bowl. Danny Leyva just took bigger steps than that – at the age of 15, Leyva climbed from Tacoma Defiance to Seattle Sounders FC.

It’s a gigantic move. a stair step on a pro career still in its infancy, starting in October of 2018. The youngest Sounders signing in history finished the Stadium Bowl and now gets to climb Columbia Center. He has 19 Tacoma Defiance teammates chasing those same dreams.

Those players can look to Leyva and fellow Sounders Jordy Delem, and Nouhou as examples for their own future.

“It’s fantastic. It gives us precedent. It shows them that at this club they will get opportunities if they earn them,” Tacoma Defiance coach Chris Little told TACDefiance.com this week. “You have Nouhou, Delem, and now you have Danny. We have other young players and guys on  that roster with Defiance that have opportunities. If they show up, if they earn it, it’s available.”

Earning it is a recurring theme that comes from coach Little, Seattle Sounders coach Brian Schmetzer, and Sounders President of Soccer Garth Lagerwey. Schmetzer points out that others with Defiance are on the doorstep. 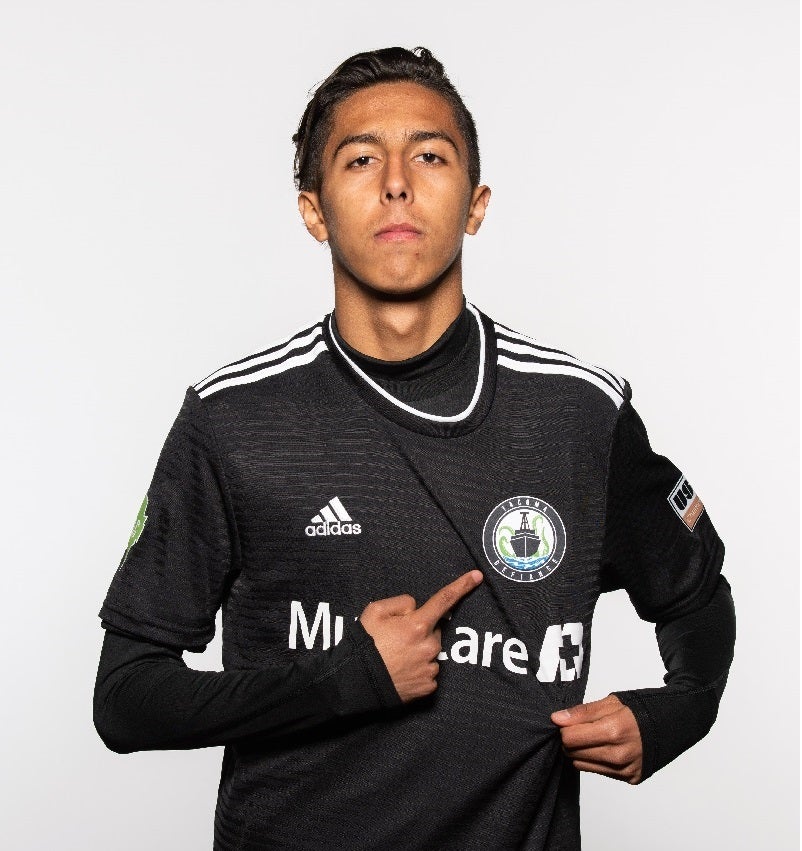 “It’s reality – if you are good enough, regardless if you are a Defiance player, or a 15-year old from Vegas, or an 18-year old from British Columbia, however that comes, we’re going to take a serious look at them. Danny’s earned that privilege. He’s earned that right for us to take a long hard look at him. There’s some other Defiance players down there that might get their chance as well.”

Each player with Tacoma and within the Seattle Sounders Academy are on an individual development path. Director of Player Development Marc Nicholls works with players, coaches, and families on those plans. The coaching and development groups collaborate on creating those plans and evaluating the Defiance talents.

“It speaks loudly to the good relations we’ve always had with, whether you call it S2 or Defiance, the coaching staffs are always intertwined,” Schmetzer said. “We’re always talking back and forth about who is playing well and who is not playing well. That’s going to continue.”

Those groups see more players who are on the verge of following in Leyva’s footsteps. The next move could even be before the international transfer window closes on May 7.

“We still have a couple of roster spots that are still open, so there are opportunities for other players at Defiance right now. If they prove themselves, we will sign them this year. This window even.” Lagerwey said. “If that timing fits in terms of their development.”

At any given home match the scouting department and coaches from throughout the organization are at Cheney Stadium – watching and evaluating. Road matches have Little and assistant coach Wade Webber and Academy & goalkeeper coach Josh Ford in attendance to relay information back. Every game is a chance to earn an opportunity. Each player is developing a catalog of performance in wins, losses, and draws. The entire club works together towards those players’ success.

“I think it’s important with the whole group collaborating – Chris Little, Wade Webber, coaches and the information they give back. It’s also important to have the coaches from the First Team and management looking at those games. It helps our developmental pathway that [Defiance] is the next step before you get to the First Team. Those games are really important with the quality of play and the performance of the players is looked at,” VP of Soccer Chris Henderson said. “I think the players know that and it’s motivation for them.”

Danny Leyva’s dream took a whole club to become reality. His hard work finished off the foundation that his teammates, coaches and family built. This is only a step.

“It’s a good step for him, but it’s important that he knows that’s all it is. It’s a step. It’s a start, not an end.” Little echoes his statements to Leyva. “We’ve talked a lot about that with him. This is when the hard work really, really starts. It’s our job to help him manage that as best we can.”

The 19 Tacoma Defiance players want to follow those footsteps. They share those dreams. The words of the entire organization are proven in the 12 Homegrown Players and three individuals who came up through S2/Defiance to sign MLS contracts.

“I think it is proof that we mean what we say. It’s not just a bunch of empty words. We are signing kids and we want to promote them to the first team as quickly as possible.

Lagerwey mantains patience with a player’s development is key. Even if someone like Danny Leyva goes from amateur talent in Las Vegas to Seattle Sounders FC in less than three years.

“Each kid has to make their own path in their own time.”