Stories, myths, and legends are how communities connect ourselves to the past. The deeper truths behind these tales are sometimes hidden. Take the legendary Kraken, for example. You see it on restaurant walls, local iconography, and we forever wear it on our crest. It’s a part of Tacoma Defiance’s primary and tertiary logo for a reason, and that reason is rooted in the complex narrative of a giant Pacific octopus, a broken bridge, and the deep waters of the Tacoma Narrows.

Is the Kraken real? 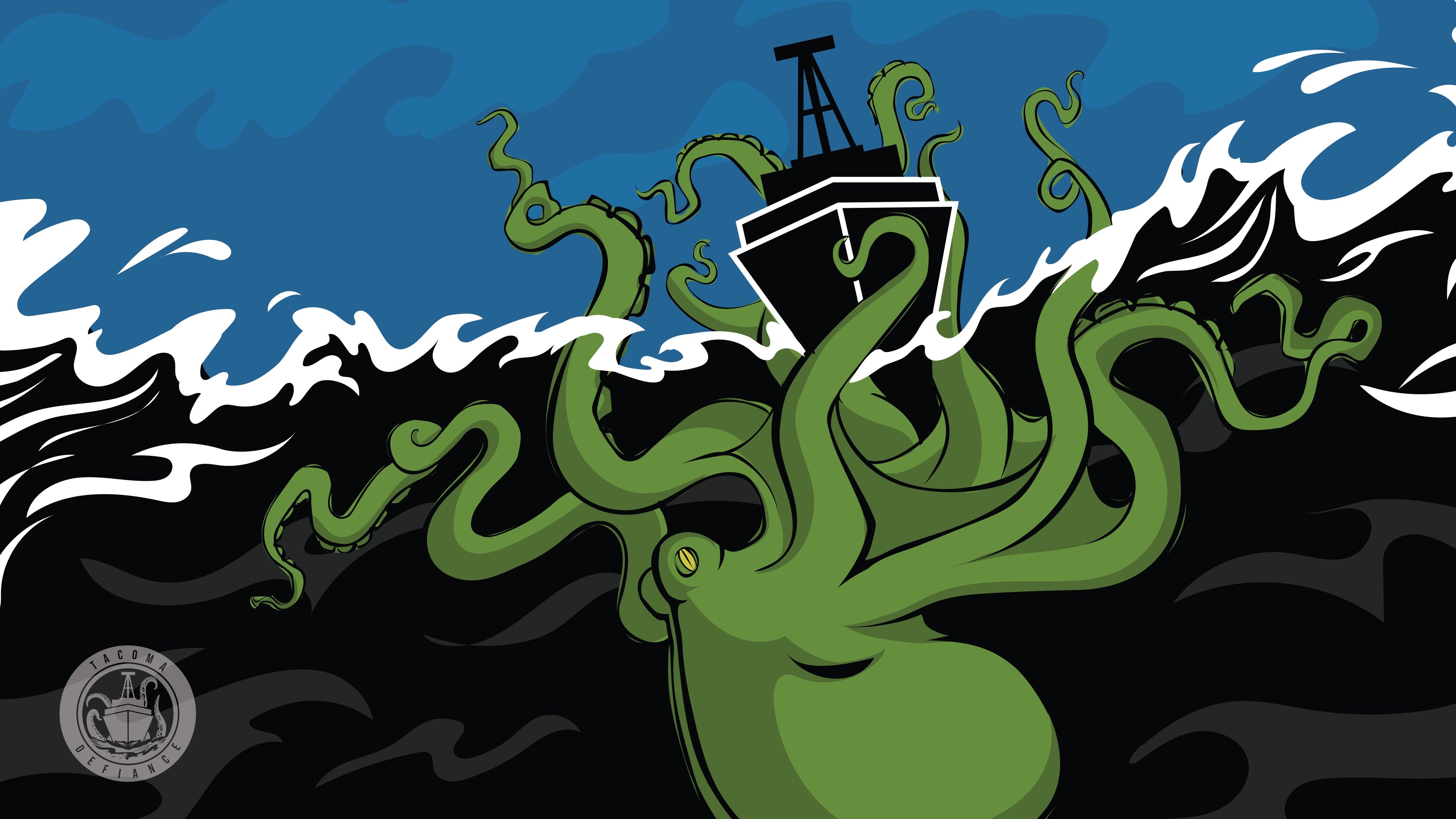 The mythical beast is a symbol of power. It is an icon for the defiant nature of the sea. It represents not just those who navigate choppy waters, but the mysterious life that lurks in the depths. This 8-armed creature with its lifeless eyes and powerful suckers reaches up from the black waves and the abyssal portion of the Salish Sea to declare that we will not be contained. Lurking in dark corners and rising from the waters, this wondrous beast’s appearance in history is a warning of the power of nature and a reminder that humans are small creatures that walk, fly, and sail with giants on our fair planet.

What inspired Tacoma’s fascination with a Greek/Norse beast of myth? The Giant Pacific Octopus makes its home in the waters just to our north and west. The largest ever found is among the wreckage of Galloping Gertie, the original Tacoma Narrows Bridge.

In the early 1960’s, Titlow Beach was the site of the World Octopus Wrestling Championships. Thousands of locals attended an event that saw grown men free dive into the Sound to grapple with smaller, less destructive versions of the beast we wear on our kits. The event was televised and eventually inspired Jacques Cousteau himself to include the region in a documentary called “Octopus, Octopus.”

Our two marks reference the octopus as something not just of the Salish Sea and the Pacific North Northwest. Tacoma’s ties to the sea go beyond the Point Defiance Zoo & Aquarium’s Pacific Seas exhibit. Our logo and city have embraced the octopus that embraces us. From Gertie’s Ghost to the 11 Wonders of Tacoma to the Giant Pacific Octopus on our marks, this many-armed beast is Tacoma’s unofficial nautical mascot.

It’s no secret that the octopus is a strange beast. Even the largest ones can pass through an opening as small as their beak, about two inches wide. With three hearts pumping blue blood and neurons in their tentacles, the octopus defies conventional understanding. Their colors change in accordance with their surroundings and their eyes are similar to humans. They’re plain different.

And at the end of the day, that probably plays part in why this city’s so enamored with them. We’re boldly different and proud of it.

In the blackest, deepest waters of Tacoma’s heart, there is a Kraken. It sits, waiting for discovery. It refuses to be truly found. It defies definition.

From many a wondrous grot and secret cell
Unnumber’d and enormous polypi
Winnow with giant arms the slumbering green.
There hath he lain for ages, and will lie

Our octupus, our icon, waits lurking with intent and remains in position ready to guard our goal. It is defiantly Tacoma, the Jack of the Sea, with a far greater legend and just as much grit and defiant spirit.