In this new world of digital meetings and conference calls, all those productivity apps can also help us play analog games as we get away from social media and the news of the day. The We R Tacoma family is breaking out new and classic games to bring our crew together at the end of the day. With our families and friends gathered around a table, we are not just playing cards and board games, we are connecting in shared moments that are authentic and pure.

We are finding ways to use technology to play traditional board games with those not with us. Modern technology like Zoom and FaceTime can power the analog games once played by candlelight, allowing us to feel connected to those quarantined in their own corner of the world.

This selection of R Staff picks focuses on the tabletop games we play while our medical professionals, grocery workers, restauranteurs, and others #KickCovid and keep Tacoma running.

Always together, We R Tacoma.

Up in a closet or bookshelf you probably have a few board games gathering dust. It’s time to take them down and play for a few hours. Jack Kelly, Director of Finance and Operations, had to adapt because most of the games he has are best with 3-6 people.

“I am a big fan of board and card games, especially when more people are involved. My usual go-to’s are Monopoly, Scattergories, or any card game (my family loves the game Wizard). Right now, my only opponent is my girlfriend. Unfortunately, most board and card games that we are used to playing need more than two players to play. However, we do have the game of Connect 4 available, which has been a great way to pass the time. Let’s just say there have been many games played and we aren’t keeping an overall tally of who wins and loses. I’m just really glad we have Connect 4, and hope to be a master by the end of this.”

Our VP of Marketing, Megan Mead, found ways to get her kids playing games with their friends, without leaving home. Modern technology for the win.

“As entertaining as I think that I am, my five- and seven-year olds can only spend so much time with me before begging for interaction with someone, anyone, else. Quarantine makes that a little tricky, but FaceTime, Google Hangouts (or Duo), and Zoom have become a new norm. We read stories with our teachers, catch up with our grandparents, and most recently started to have play dates with our friends. My pick is any game that can be played physically and virtually all at the same time. Here is what we have come up with so far: Charades, Yahtzee, Battleship, Go Fish, and Bingo.”

Like Megan, Stadium Operations Manager Zach Armstrong is using technology to play a classic game. He and his girlfriend are playing chess on their iPhones. The student has become the master.

“When this quarantine started, I taught my girlfriend how to play chess. After a month into quarantine, we play on the iPhone app about three times every day. She now typically wins most games we play.”

Over in Tukwila, Tacoma Defiance midfielders Jesse Daley and Collin Fernandez are playing Settlers of Catan with Sounders FC forward Justin Dhillon. Dhillon says he’s still teaching the two the intricacies of the game. If you pass their apartment, you’ll hear the shouting of “I have sheep. Anyone have brick.” and similar Catan classics.

2019 Tacoma Rainiers infielder Tim Lopes is playing Scattergories and Codenames with his family.

“I just always enjoy games that brings family together around the table.”

We can all use a bit more of that right now. 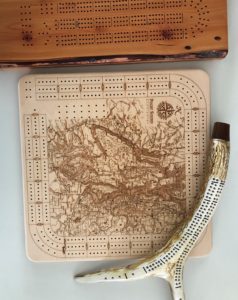 The extra time at home is helping Maddie Miller, Youth Soccer Manager, remember her trips around the country. She and her husband are bonding over their love of cribbage.

“Since we have so much time on our hands, my husband and I have been perfecting our cribbage game. We collect cribbage boards whenever we travel to a new place and find a unique one. We play on a different board every day to switch things up.”

The top board is a hand carved masterpiece from Montana.

Prior to shifting to our work from home status, Creative Director Casey Catherwood was leaning heavily into playing Unstable Unicorns around the office. Reached for comment on this story we learned that he’s playing something like The Floor Is Lava, except it’s called The Floor Is Not Lava: The World Is a Vampire. It involves rehearsing gameday dances, yelling in the attic, and a vivid imagination.

Active imaginations power the world of role-playing games. The most famous of those is Dungeons & Dragons, which is in the middle of a renaissance. D&D enthusiast and We R Tacoma Content Creator Dave Clark has played a couple sessions over G-chat and Twitter. He’s looking forward to playing over video just as soon as his dog can stop ruining conference calls with his barking.

“I enjoy telling stories. D&D helps me do that with my friends. Rather than watch a static tale like a movie, we weave the tale together. It creates something greater than any one person could come up with on their own. Only one person in my current group played the game prior to 5th edition coming out five years ago. The game has never been easier to learn, and the available online tools are wonderful.”

You can read about how to play various RPGs online at Polygon.

Both Tacoma Games and Terra Crux are open for online orders if you want to expand your tabletop gaming collection while you Stay Home, Stay Healthy.

Next up? The adult beverages we’re enjoying while we kick back and relax.

Previously we shared the movies, shows, music, video games, and books we like, and the caffeinated drinks we’re enjoying while we indulge.

The Tacoma Rainiers, Triple-A affiliate of the Seattle Mariners. Tacoma has been a member of the Pacific Coast League since Cheney Stadium opened in 1960, and has been a Mariners affiliate since establishing the Rainiers moniker in 1995.