Abby E. Murray, Kellie Richardson, Douglas Bond, Brent Hartinger, and Frank Herbert are some of Tacoma’s most famous authors and poets. The city breathes life into their verse and prose. Our city finds its way into the background of the novel Secret Deaths of Arthur Lowe, by local writer U.L. Harper.

It is subtle theme only recognizable to those who know the city; and just quiet enough that Harper did not realize the influence of his adopted home. Protagonist, and antagonist, Lowe has the power to never deal with the loss of a loved one. He can bring the dead back to life, but there is a cost to both the saved and Lowe.

Harper weaves a tale that is part horror, part magical realism, and part coming-of-age story. Lowe’s healing and pain are disturbingly real in an unreal world. The novel’s world feels even more real for someone from Tacoma due to the subtle similarities between Arthur’s neighborhood and those in which we live.

Walkable neighborhoods, schools, and diverse communities are what brought U.L. to the City of Destiny. It reminded him of his home of Long Beach, California. The schools in the book feel like schools of Tacoma.

Similar to how the Asarco plant provided Herbert with inspiration towards Dune, Long Beach and Tacoma provided the environment that show up in Secret Deaths of Arthur Lowe. Harper says that ideas are “already around us. I think a writer’s head works like an antenna. The wind blows and you collect ideas. Later you open it up, swish it around, and whatever rises to the top that’s it.” The ideas and concepts of our city rose to the top of Harper’s third novel, influencing it in certain ways.

At this time, Harper lives in the Lincoln District. 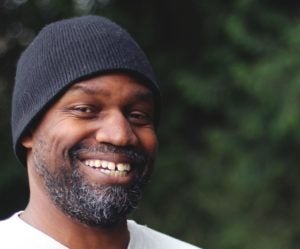 “I consider myself Lincoln, but I exist in Central.” He fits the coffee shop-writer stereotype, drifting through Central Tacoma’s and Hilltop’s various cafes. Each gives him a slightly different flavor – both of bean and of the neighborhood. Recent developments in Lincoln make it feel more like home to Harper.

“Take Lincoln – it’s the same structure as Stadium, but the neighborhood is not the same. I didn’t identify with the Lincoln District until they started that project. I really wanted that road done, just so I could drive up and down the street. That was my identification that ‘this is the area I live.’ This is my place.”

He’s referring to the Lincoln District Revitalization Project. It helped turn Harper from transplant to loving Tacoma and considering it home. Arthur Lowe needed his wife Sandra, best friend Quinn, and their small circle of friends (some who were once dead and now alive) to feel as if he had a home.

Real life is simpler than that. Places and the people in them build communities. One thing that any newcomer to Tacoma learns quickly is that the people here want to talk to you about why they enjoy the city. The sense of ownership in this city grows quickly. Outsiders become insiders and friends – no resurrection needed.