We know you could watch endless highlights of Jarred Kelenic roping extra-base hits and Austin Shenton making the Cheney Stadium confines look like a wiffle ball field. But the Seattle Mariners system is stacked with some Grade-A arms, and a few those guys are slingin’ it with the Tacoma Taxi Squad this summer.

We caught up with pitching coach Rob Marcello Jr., who was supposed to be in Tacoma as the Rainiers pitching coach in 2020. Rob gave us the 411 on a few of the organization’s top pitching prospects and what their time in the South Sound has looked like so far.

Q: Logan has only thrown a few innings in intrasquad games so far. Where’s his progression at?

A: After Summer Camp he had a little lat issue, so we kind of toned it back. Injuries are up across the board in baseball which is nothing to freak out about. He’ll be going 4 innings his next start.

He’s adding in that changeup and trying to figure out how to use it. His fastball [velocity] has been up compared to last year.

His curveball and slider, we’re kind of over that stage of trying to make those pitchers better from a developmental stage. Now, it’s locating it and repeating it.

His pitches are now coming along where they’re starting to be real weapons which is fun to watch.

Q: He struck out 165 batters last year in 135 innings. Do you expect him to be a high strikeout guy as he progresses?

All four pitches he can throw to lefties and righties so it’s fun to watch. He came off the mound in Summer Camp and was like, “man, I just threw three innings and didn’t throw my slider. I’ve never done that in my life.” And you could tell he was excited about that, and it’s fun to watch that in a pitcher where he’s excited because he didn’t throw his best pitch for three innings, didn’t give up a run and struck out four guys.

That’s when you know as a coach there might be something more special than what we even thought.

Q: Logan has missed out on a number of chances to compete as a pro because of an illness after he got drafted and now the pandemic. How do you keep him in a competitive mindset?

A: That’s him. He’s a competitor. We say as a coaching staff that he doesn’t need a coach. He only needs a coach to keep him out of rabbit holes and keep him from changing his mechanics and pitches because he’s always looking to get better.

Our job is to keep him focused. He’ll watch Jacob DeGrom pitch and then try to add something from him and it’s like, no Logan, you’re not him. Try it in the offseason.

He’s a step ahead of everybody on that mental side, and I think players and coaches see it. He’s starting to be more open so players are able to talk to him about what he does and his process.

Q: You’re admittedly an intense coach. Does your level of intensity change with Emerson Hancock based on his experience level?

A: No, I think it’s fun. It’s kind of a unique relationship between me and Emerson. I just want to watch the way he works.

Coming out of college I never really want to push guys and see what they do. That’s more for our organization to figure out.

I just like to watch and pick apart his process. I want to figure out what he likes, what he enjoys, and build that relationship more than anything right now.

Q: Because of his shortened college season at Georgia, how has that changed his workload and the organization’s expectations for his summer?

A: I think that’s something every organization is trying to figure out right now. Health is coming first, especially with him being a first rounder.

For us I think it’s pushing our process and our ideas on him and making him understand this organization and what we care about. The best way for him to learn is to see other pitchers care about those same things which is awesome.

In Everett, you’re around guys from the same draft class, where here he’s with Gilbert, he’s with Kirby who just went through it, he’s with Williamson and Campbell and he sees what these guys and the Mariners care about. It’s like, ‘oh, this is why your guys’ pitches got better and this is why you care about this.’

I asked him how it was at T-Mobile Park and he was like, ‘surreal, Rob. I was in a big league locker room and Kyle Seager was right there.’ So he was kind of wide-eyed, but was taking it all in and learning what it’s like to be a big leaguer, which is fun for him.

Q: George didn’t make any pro appearances longer than 48 pitches last season. Has he been able to get stretched out more this summer?

He’s another guy with good, first round stuff. He could go to Double-A or Triple-A next year and get outs. There’s no concern about that.

Now it’s just eating those innings and learning about hitters, scouting reports, the process of what goes into a big league start compared to just going out and throwing. There’s more to it, and he’s just learning that part of it now.

Q: He’s got a lot of good movement on his stuff. Is there a pitch that he’s already identified as his go-to “out” pitch? 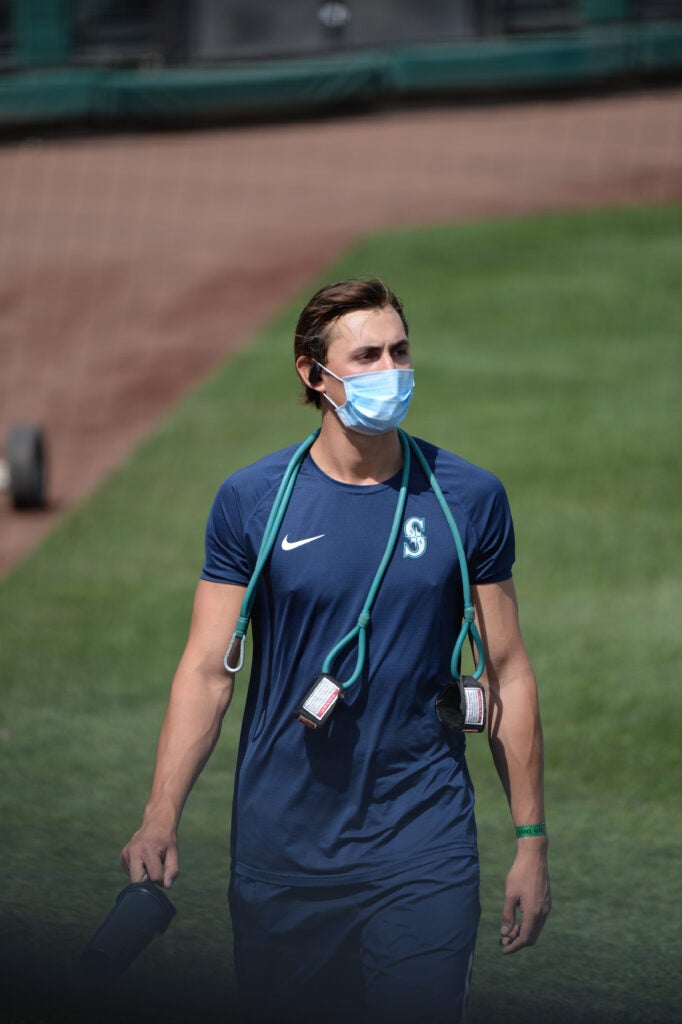 A: His fastball is just overpowering and he loves it. It’s something that hitters have told him he might throw in the zone too much. He’s a guy who doesn’t walk anybody and he’s done that his whole life, and maybe he’s throwing too many strikes.

We want him to fill up the zone and learn from that. So we say go challenge these hitters, who cares? He’s given up a home run every outing so far and he hasn’t done that before.

A: He’s kind of soft spoken. He’s Zack Greinke in my mind. I love him to death. You can never really get in his head in figure out what he wants to accomplish, but he’s such a fierce competitor that he can make hitters feel embarrassed. And I think his main takeaway is, ‘how can I make these Triple-A hitters not hit me?’

It’s hard to get anything out of him. He’s meditating in centerfield or always has his earbuds in and is going about his own business. He’s unique, but it’s awesome to see.

We’ll keep you updated on the Taxi Squad as they stay game-ready for their chance with the Mariners in this year’s abbreviated season. For the latest and greatest on the Taxi Squad, the Tacoma Rainiers and all things Cheney Stadium and South Sound culture, follow us on Twitter, Facebook and Instagram, and sign up for more at WeRTacoma.com.