It’s within the realm of possibility that Rebecca Carr Staley foresaw the growth of Tacoma into the mighty city it is becoming. Some called her a witch due to her success as a clairvoyant. Clad in all black, Grandma Staley worked for two things the Tacoma establishment (outside of her ex-husband and family) weren’t fans of – fortune telling and women’s suffrage. Insulting the mystic in black robes, black dress, black hoodie, black jacket was easy. Rebecca’s legacy stands much greater than any of her detractors.

In the early 1900’s, Tacoma took a lead in Washington’s women’s suffrage movement, while the state itself took a lead in the conversation around the nation’s women’s suffrage movement. As a territory, Washington regularly passed and re-passed laws to allow women to vote. As a state, permanent suffrage for women came about in 1910, ten years before the 19th Amendment. Tacoma granted women full suffrage in 1909. In 1908, Tacoma gave women full control of the city the same day Rebecca Carr Staley’s obituary was published. 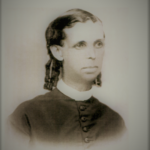 She almost certainly foresaw that as well. The seer saw a lot. Her history of success earned her respect in Portland (their seers didn’t help find a missing daughter, but Staley did), throughout the USA, and even in Tokyo.

Raised as a Quaker, Rebecca defied her upbringing and supported the Union Army during the Civil War. Her abolitionist values demanded it of her. She was following the path of husband Job Carr and son Anthony. Eventually she and every adult male in the family joined the Union in some capacity. Rebecca earned a pension from her service that helped lead her on an independent path. When Job left the home, Rebecca didn’t feel a need to follow. Her path to Tacoma took many years and came after a second marriage. 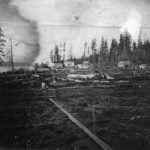 When Carr Staley came to Tacoma, Job was part of the foundation of Tacoma City and unified Tacoma. Son Anthony was the first person to take a photo of the new city, all the way back in 1870. Rebecca’s work was about building Tacoma. It was about bettering Tacoma. Through advocacy and clairvoyance, Rebecca created a Tacoma welcoming of other soothsayers, sailors, and most importantly women.

The Senior Scene – The pioneering life and times of Rebecca Carr

University of Washington – A Ballot for the Ladies