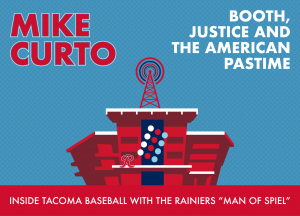 We certainly had an eventful opening night at Cheney Stadium on Thursday!

The overwhelming feeling at the park was simply joy at getting to see Triple-A baseball in Tacoma once again, and then the players delivered.

Jarred Kelenic homered twice in his first Triple-A game, instantly living up to the hype as one of the top prospects in the sport. There are lots of details on Kelenic’s performance and video of the homers in the “Stories You Might Like” section toward the bottom of this post.

Before we get to the game day information – and boy do we have a pitching match-up in store for us tonight! – let’s take a moment to give some credit to some of the overlooked performers from last night’s game.

Tacoma starting pitcher Paul Sewald is a veteran who has been a reliever his entire professional career, but he excelled when forced into his first pro start. Sewald delivered two perfect innings, striking out five of the six batters he faced.

He was followed on the mound by Yohan Ramirez. As a Rule 5 draft pick last season, Ramirez spent the entire season in the Mariners bullpen where he proved difficult to hit, but quite wild walking nearly one batter per inning pitched. Last night he pitched two scoreless innings without a walk, while striking out four.

I’d never heard of Reeves Martin until Wednesday, when it was learned that he was coming up from Class-A Everett to help our thinned-out pitching staff. I know him now. Martin came through with two scoreless innings without allowing a hit, and escaping his own walk-induced jam in the sixth inning.

Finally, big kudos to Vinny Nittoli. Released by the Mariners out of Class-A during spring training in 2017, the team brought him back this year and he made the Triple-A roster. Last night he pitched two perfect innings – and they were high pressure innings: the eighth and ninth innings of a tie game.

Kelenic received all the headlines, but the Rainiers had quite a few premiere performers last night. Let’s see if they can get into the win column tonight.

A brief word on the broadcasts, specifically the pregame interviews:

Because of the Covid-19 restrictions and MLB rules pertaining to them, I’m not currently able to do pregame interviews with players. However, we’ll continue to look at the situation over the course of the season – I like doing them, they are usually fun (and the rare occasions they aren’t fun are usually quite amusing later on).

I’m trying to come up with a way to at least get manager Kristopher Negron for a virtual sit-down once a week, but I’m still working on the technology of how to get air-quality audio of that. If you’ve been on Zoom calls, you know the sound quality varies from “acceptable” to “what language is he speaking?” Manager shows are a big part of baseball broadcasts, and I’ll let you now when/if we figure out how to do this.

YESTERDAY: The Rainiers dropped the season opener in 12 innings to El Paso, 7-6. The game was tied 2-2 after nine innings of strong pitching, but once we got to extra innings and the automatic baserunner at second the runs started to score. Jarred Kelenic homered twice for Tacoma, and Cal Raleigh had a clutch game-tying two-run blast in the tenth, but El Paso’s Ivan Castillo takes home the game MVP by going 4-for-5 with three RBI and the crucial triple in the top of the 12th.

A huge prospect showdown here. Gilbert is rated as the Mariners top pitching prospect, and ranks No. 28 on the Top 100 Prospects list for both Baseball America and MLB Pipeline. Gore is even more highly touted, ranking No. 6 overall by the Pipeline, and No. 8 by Baseball America. The Athletic’s Keith Law has Gore ranked No. 2 overall on his prospect list, behind only the consensus No. 1 prospect in the game Wander Franco.

Both pitchers are making their Triple-a debuts tonight. Should be quite the battle!

BROADCAST: All games will be broadcast free on a live audio stream which is available right here.

As in the past, a streaming HD telecast is available through MiLB.TV. It’s a subscription service, but it’s just a one-time payment that gets you thousands of games from all levels of the minor leagues, including all 120 Tacoma Rainiers games home and away. That same link above has details on how to get it if you scroll down the page – there’s even a discount code.

Unfortunately, there is no traditional terrestrial radio station carrying the games at this time.

Listen to every home and away Tacoma Rainiers game for free HERE. You can also download the MiLB First Pitch app for a free and easy one-click listening experience at home, work or in your car. Watch an HD video broadcast of every game with an MiLB.TV subscription. Use code: RAINIERS to save $10 on an annual subscription.

Single game tickets through May 11 are now available. Purchase tickets in either vaccinated (must show proof of vaccine at gates) or non-vaccinated sections. Find more information and purchase single game tickets here. Questions regarding season tickets can be directed to Tickets@WeRTacoma.com.

The We R Tacoma Team Store is currently open Monday-Friday from 12 p.m. to 5 p.m. (non-game days) or until the end of the game on home game days. Team Store purchases can also be made online 24/7. Grab your Rainiers gear, your Defiance ‘fit, and follow the team store on Instagram and Twitter.