Last September Danny Leyva was in the Sounders Academy playing up with Tacoma Defiance. Now, he has four MLS starts with Seattle Sounders FC having twice advanced through the developmental system. Not only are there 18 players with similar stories on professional contracts now, there are about 150 that are trying to follow a similar pathway. 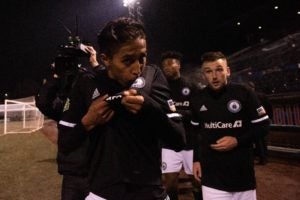 Every player on that pathway has the same ambition – to be a Sounder, clad in Rave Green.

Reaching those heights takes humility, dedication to the community, coaches and staff that craft on- and off-field talent, and ambitious players.

Marc Nicholls is the Seattle Sounders Director of Player Development. He is a USSF ‘A’ license coach with several other certificates who manages a cadre of coaches, scouts, trainers, and educators.

Nicholls credits the Sounders and Defiance fanbases for much of the success of the Academy.

“Without the fans going to the game, without them buying the kit we would not even have an Academy. We know how important the Academy is to the fans because I think it was last year or the year before that Jordan Morris was selling more tops than Clint Dempsey.”

Those fans also help Nicholls and the Sounders recruit players from outside of Puget Sound.

While the out-of-town players are the ones that get notice from national press, the core of the Sounders Academy live within an hour of the Seattle. Ten percent come from the rest of Washington and another ten percent are from around the United States.

With Defiance in Tacoma, Nicholls sees a future with more players from Tacoma.

“We have an increasing amount of talented young players from Tacoma. Oscar Rincon is a forward with the U-15s.”

Rincon scored 18 goals in 18 games with the Sounders U-15s. He also tallied 10 assists.

“I would really love to see boys from Tacoma starring for Defiance with the kids from Seattle. For me, that’s the job.”

Defiance are a key part of the Sounders Academy and developmental system. Many players with take the pitch in USL one weekend and with the U-19s the next. The grass field at Cheney Stadium is one of the final steps along the developmental pathway that starts on fields around Washington.

“It’s crucial. The gap between U-19 and First Team is significant. Tacoma Defiance bridges that gap and more. It represents another community.”

Athletes: ~150 between Defiance, full-time Academy teams, and the Discovery Program

Schedule: Fall to spring with playoffs in summer