What is art? The written word, a painting, a movie – all of those. You know what else can be art? A neighborhood bar. The walls and wood talk to you. The food paints a culinary picture. 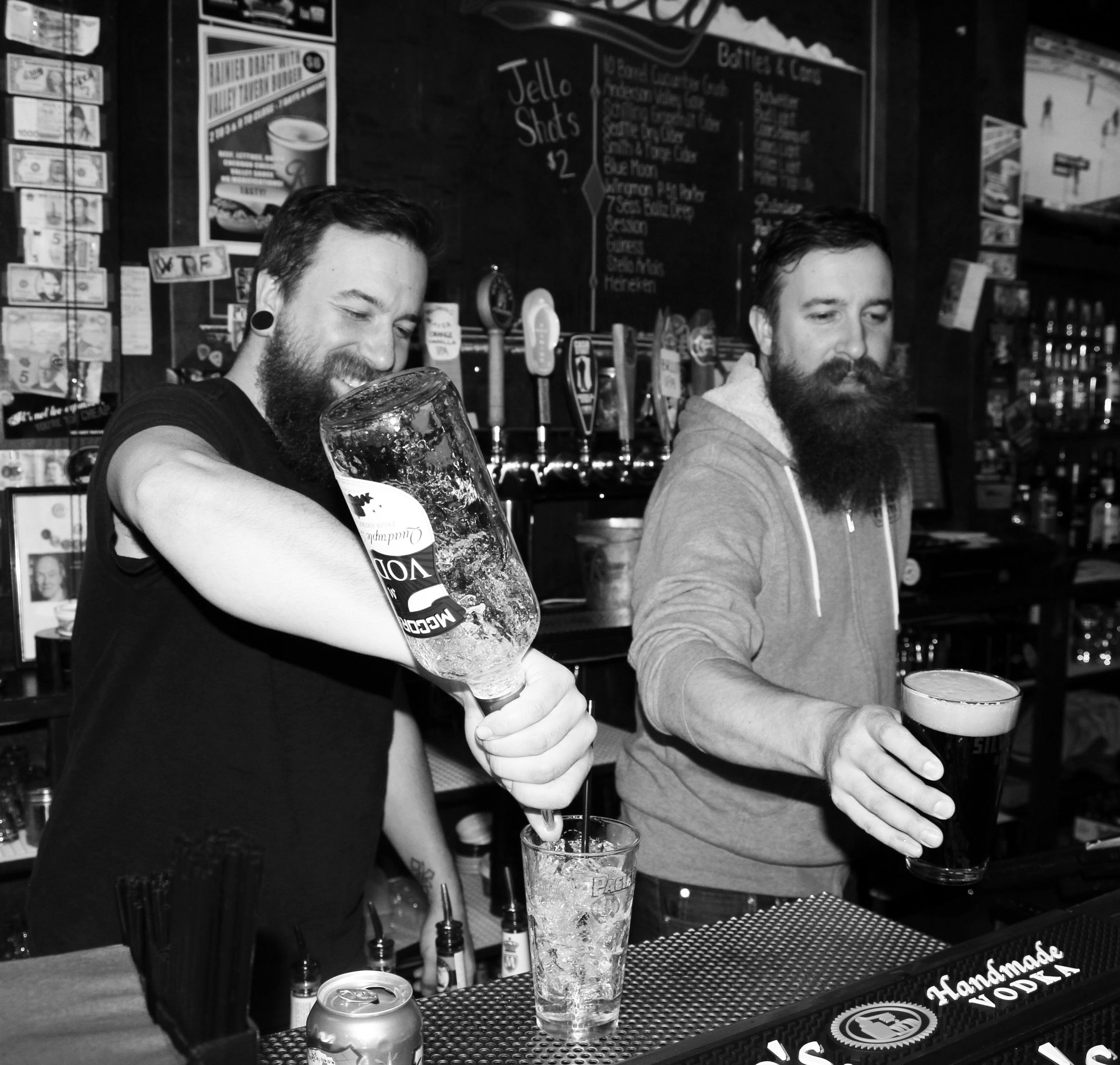 The Peterson Brothers, twins from Tacoma, call themselves artists. When you walk into one of their three establishments, you enter their emotional space. 1111, their first bar, may be where you discover the most about Justin and Robbie Peterson.

On one wall, you find a scrap bar of metal they bought at a garage sale sometime around the age of eight-years old. There are signs for defunct Tacoma breweries, a small history museum dedicated to Rainier Beer, a bear-deer jackalope taxidermy hybrid on the wall. It’s their “beer,” a mascot for the neighborhood as much as for 1111.

Each piece means something to them. Each is insight into their defiantly Tacoma soul.

Everything about the self-titled “Bro Bros” is Tacoma. These two bar-creation artists love this city and are especially fond of the neighborhoods where you find 1111 (Hilltop), The Valley (Dome), and Peaks & Pints (Proctor).

1111 was their first restaurant. That was probably a bit of fate. The twin number (11) appears in the address five times, as 1111 is at 1111 S 11th St. It’s next to their favorite phở shop, from well before Hilltop became their work-home.

And work is home for Robbie and Justin. If they start a fourth restaurant it will be in Tacoma.

Robbie starts with a statement of fact and Justin finishes it.

“We prefer to be in close driving distance to our establishments. I don’t know how people do this in different cities.”

“It makes it a lot cooler to hang out with our customers. We can get schmoozy when we have time to do it. We like to meet the regulars.”

Regulars are key to their business success. Those regulars started with their friends and over time, new people became regulars. They too have become friends.

“You’ll have a regular sitting at the bar, a new person walks in and they’ll tell the story for you. It’s cool, because you can’t be everywhere all the time. Having good regulars helps sell the business.”

The bros watched “every single area of Tacoma” change, but they stayed. Their friends came back. They joke that Tacoma is a vortex. It pulls people back into the area. There is the draw of family and friendship.

The Petersons origin story is the origin story of modern Tacoma. They saw what Tacoma was, thought it could be better, and worked to make it so. Sweat equity and the support of the community made their dreams reality.

The twin brothers are the perfect combo, like a local draft beer and a $10 sandwich.

“We’re stuck with each other, but we work really well together. He’s the perfectionist and I’m the just get it done.” That’s Robbie talking. Justin shares the sentiment.

Robbie and Justin got it done. Then they did it again, with new partners in a new neighborhood. And a third time they did it.. Each establishment is a reflection of the neighborhood, but also a display of the Peterson’s partnership with their owner-friends and landlords.

“Having a landlord that is also Tacoma helps a lot, because they believe in the success of other Tacoma businesses.”

That’s Tacoma, really. It’s a group of people working together making our city better. It’s two sons of the Stadium District taking a teenage dream and forcing it to become reality.

“We’ve been talking about this since we were 16. There are so many ideas we’ve talked about. Any time we go out of town we stop by the neighborhood bars to get inspiration.”

They have other dreams, restaurant concepts that may or not see reality. Justin expects there’s a new project, at some point. While the out-of-town bars would be an influence, the Petersons wouldn’t ignore home. Any new idea will embrace these twin Tacoma towers. From there, it will create a ripple of enjoyment for many South Sounders to enjoy.

How could it not? These are local artists painting with sandwiches and beers on the canvas of culture. Our city of neighborhoods reaps the benefit in more ways than one.