Teenage phenoms like Felix Hernandez, Bryce Harper, Julio Urias and Juan Soto are no longer once-in-a-lifetime talents, but part of a new wave of youth bursting into the spotlight. It’s becoming more and more common to see a player with freakish talent and uncanny smarts for the game debut in The Show at an early age. How do teams like the Mariners adapt to these young stars’ never-before-seen talent and overwhelming knowledge of baseball? Give them a coach who understands all the same things and knows how to relate to a kid, because it wasn’t long ago that he was one.

Enter 29-year-old Rob Marcello Jr., the newest Tacoma Rainiers pitching coach who will make his Triple-A debut in 2020, following a standout season in his first year as a Minor League coach with Advanced-A Modesto. 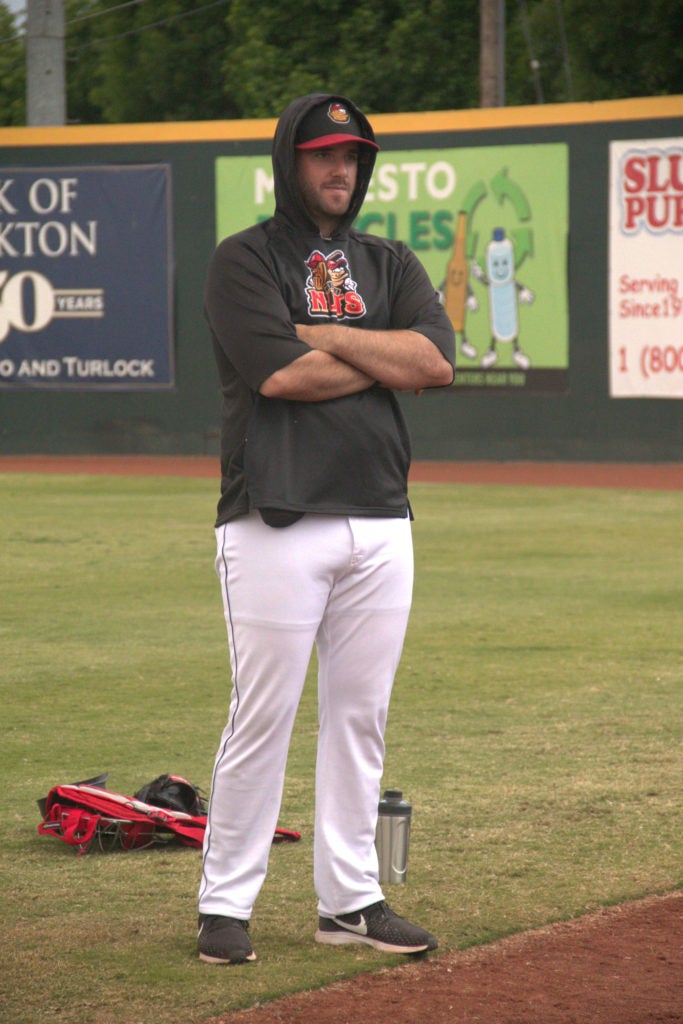 Marcello Jr. hails from Roswell, GA but resides in Florida with his wife Cara and two children. His college career began at Indian River State College and eventually took Rob to Appalachian State where he was drafted by the Philadelphia Phillies in the 17th round of the 2013 Draft.

He played out the ‘13 season with the Williamsport Crosscutters of the New York-Penn League before making the decision to turn in his cleats in exchange for a clipboard and whistle (or whatever baseball coaches carry). For a young player who had gotten his first taste of pro ball, and was a highly-regarded collegiate prospect, Marcello Jr. took a look to the future and didn’t see playing baseball as a viable option for supporting himself and his family, so he made the difficult decision to move on at an early age.

“Being a player took a toll on me,” Marcello Jr. said. “There was a lot of pressure and I probably didn’t handle it the right way. I got hurt and thought, ‘man, I’m not going to pitch in the big leagues. I don’t have the stuff, the writing is on the wall. Let’s go coach.’”

Rob’s ambition for coaching developed at a young age. He admired his first coach. That coach was a man who never played professionally, but who left a lasting legacy in his community. Rob has been working hard to honor that legacy his entire adulthood. That man was Rob’s father, who he lost far too soon.

“The drive started with my dad,” Marcello Jr. said. “He passed away when I was 13. He coached me and my three older brothers, so I grew up at the baseball field. When he passed away, a baseball complex was named after him. The guy never played professionally but he still left that impact on an entire community. How can I do that on a larger scale because I did play professionally? I can not only help kids, but can help the game of baseball.”

That passion, and Cara’s goal to pursue her Master’s Degree, took the young couple to the University of South Florida shortly after Rob’s playing days were over. Cara was pregnant with the first of their two children at the time, so the recently retired, 23-year-old Rob needed a job and ended up at Division-II Rollins College.

“I was the JV, lowest level pitching coach getting paid $5,000 a year,” Marcello Jr. said. “I’ve got no money, a kid on the way and I need to start doing some lessons. So I was doing lessons and lessons and I ended up getting some really good pitchers that knew people.”

Through those talented pitchers that he trained, Marcello Jr. made some influential new contacts, and opened Top Level Athletes (TLA), a baseball training facility in Orlando. He got the business up and running but it was only a few months before he got a call from one his newest connections, 2019 Mariners pitching coach Paul Davis.

“Paul called and said, ‘I want you with the Mariners.’ So they gave me a good starting salary and Cara said, ‘let’s go do it if that’s what you want to do.’ The resources they have are unbelievable and being able to coach the players with those resources is much easier.”

Davis saw the potential in Marcello Jr., and the first-time professional coach lived up to the hype with Modesto. His staff broke the California League record for strikeouts (but so did Rancho Cucamonga who edged the Nuts by 18). They posted the second-best ERA in the Cal League (3.68) which led to Marcello Jr. being awarded the organization’s Dave Henderson Minor League Staff Member of the Year Award.

After such an impressive season, Director of Player Development Andy McKay had no choice but to ask Rob to fill the pitching coach vacancy in Tacoma. This season he’s packing up his bags and moving to the furthest place in the country from his family in Florida. Fortunately, the well-traveled coach has family in Seattle and a wife and kids who lend their support from across the country.

“This year the kids are starting to understand,” Marcello Jr. said. “They know Dad is going to baseball. He’s always got baseballs in his car, he likes baseball, so let’s play because he finds it fun. I’m sure they’ll remind my wife that they need to ride an airplane and see Dad. I give a ton of credit to my wife for doing it all year.”

As he prepares for the 2020 campaign, Rob’s goals start with his coaching counterparts.

“For me it’s learning from [manager] Daren Brown and [hitting coach] Roy Howell who have been in the game forever,” Marcello Jr. said. “It’s taking bits and pieces and also sharing what I know about analytics and sharing knowledge. Talking to Brown, he’s just as excited to have a young guy to teach and learn from. I’m a pretty open guy and I’m not going to shut them out. My top priority has always been to learn more and make more connections with players.”

Rob has established trust with the organization, and now he has a chance to prove himself with the highest-level affiliate. He’ll reconnect with some of his guys from Modesto who are in a loaded system, ready to command the future. Putting one of the best young pitching coaches in the game with a premier collection of pitching prospects will be a dangerous combination for the Rainiers in 2020.

“I think there’s a bunch of pitchers that are on their way to being big leaguers. They’re coming, and they’re ready to be there.”

Next week we’ll share part two of our conversation with Rob Marcello Jr. as he dives deeper into analytics and new wave technology in baseball. We’ll take you inside the mind of the successful pitching coach and how he approaches coaching in baseball’s modern era.