Imposing his will on 405, Chris Little taxis his own kids to and from their practices and events. His daughter is a gymnast. His son a soccer player. Chris and his wife Kara always make time for their kids and their odometer’s have racked the miles to prove it.

On top of leading Tacoma Defiance, Coach Little is also the Head of Coaching for the Sounders Academy. He is as ruthless at managing his schedule as he expects his players to be within the 18.

Somehow, despite being involved in a dozen or so teams, Little finds time for family, to include his son’s infatuation with the WWE. Little was an Ultimate Warrior fan as a youth and now is rediscovering his enjoyment of scripted sports.

“He’s a family guy. He talks about his kids all the time,” Webber says. “He goes to his kids’ gymnastics meets and soccer games. He’s heavily involved in the life of his children.” 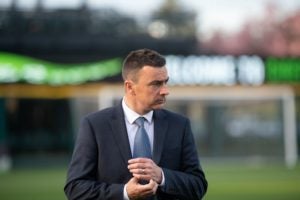 Little is also exceptionally ambitious. Twice in his life, he undertook major changes to pursue success in soccer. After being released by AFC Bournemouth, Little accepted a scholarship offer from UNC-Pembroke.

“I came to the US to come to college. I was with Bournemouth and got released as a player. I had the opportunity to come on a soccer scholarship. Very last minute, and I ended up going to school in North Carolina. It was life changing. When you are 18, you don’t really know the magnitude of that decision.”

Growing up with a Scottish accent influenced by time in Swindon, he had to learn a Southern drawl in a rural county on the borders between the Carolinas.

“It was a rural area where the University was. Everything was different – the language, the food, the Southern drawl. It was a great life experience.”

In 2017, he took another major shift, this time with a wife and two children. After success with Elon University, NC Fusion, and the Carolina Dynamo, the Seattle Sounders came calling.

No longer would Little live in rural towns of about 10,000. He took his family across the United States to the suburbs of Seattle. Joining the Sounders Academy was a sign of his ambition. Chris Little took over the U-16s while Wade Webber was the head of the U-18s. Webber was impressed with that decision. 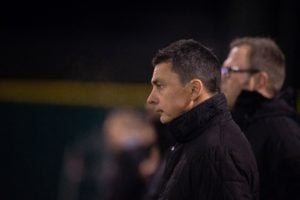 “He’s driven, as well. You don’t have your family move across the entire country with you to take a U-16 job with the Sounders Academy when you have two kids and a wife. You do that only if there’s a long-term commitment to going up. He’s troubled by the lack of success. He wants Tacoma Defiance to be a successful team. He wants them to win.”

“I think he works with you more personally at this level. It’s an easy transition from the Academy to Defiance.”

Chris Little says that’s because even though he has more teams underneath his scope, he has fewer players which are his focus.

When Little truly focuses it is solitary. He dedicates time to the specific task. He’s more binge-watcher than multi-screen multi-tasker.

Family. Defiance. Sounders Academy. Those are his foci. 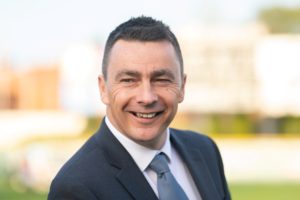 With his family he spends time remembering the Ultimate Warrior and Hulk Hogan, watching their sporting activities, and music. His music tastes are where his British background sticks out most, maybe more so than the style of soccer he instills.

“I’m a British rock fan – the Who, the Beatles. My era was when Oasis, The Verve, Stone Roses came through. I’m influenced by those kinds of bands. Some of the newer bands I’m into this year are Foals, Catfish and the Bottlemen put on good shows.”

Little went to Catfish and the Bottlemen when they visited Seattle in March. It’s easy to imagine him imposing his will on SoDo parking and dedicating those few hours solely to the music, just as he dedicates his work hours to player development in pursuit of wins and his players’ career advancement.