Before Harold Moss became Tacoma’s first African-American mayor he was just a man looking for a home. He sought not just a place for his family to take shelter, but a home in a community that did not accept him for the color of his skin.

His Tacoma story starts in the 1950s, a time when redlining perpetuated segregation. Tacoma was not immune to the practice, with certain neighborhoods divided along racial and class lines.

The impacts of redlining are felt in our neighborhoods to this day. Moss saw the hurt that redlining seeped into the area, and knew he needed to do what he could to combat its negative effect. It might not have started as a mission to become Tacoma’s godfather of politics for the African-American community, but it’s where it would take him. He used his desire for basic equalities to challenge systems in a bygone era that is still imperfect in the year 2020.

Harold Moss passed away on Monday, Sept. 21, 2020 in his Tacoma home. Tacoma’s first Black mayor, who was an inspiration to so many, leaves an impact that will live on and never be forgotten.

If you had the honor to meet him, it was clear that Mr. Moss was someone who embodied Tacoma from day one – His aura was one of someone who inherently asserted his rights, fought for himself, and for all people. He is someone who saw societal flaws and questioned them. Even unjust laws and practices could not contain him.

“In Washington, we passed an anti-discrimination law, but the law doesn’t mean anything unless you challenge it. My wife and I were trying to build a house and the space we finally bought we bought because the person I called said ‘hey you sound different. Are you colored?’ and I said ‘yes.’

The seller didn’t want to sell and the potential neighbors refused to speak with Moss. Becoming part of a broader Tacoma might have seemed impossible. Moss took the impossible and triumphed.

Seeing an obstacle that would have discouraged most, Harold found a way to buy that house.

“I found someone who would help me buy that lot. And we bought it. We couldn’t put him in jeopardy for buying the lot ‘cause he looked white, with very fair skin. We stayed away from the property for six months before we let him know we had it. That was when we were ready to hire a contractor to build a house. It was that way. I’m determined to get what I’m entitled to. I’m an American and I say that with great pride. I would make the system work for me.”

Tacoma’s history is an assembly of heroes who challenge systems. Harold Moss challenged systems to become the first African-American on the city council and the city’s first African-American mayor. He built his reputation for building a community of communities by treating others with respect, even while he himself was often dismissed because of his race. 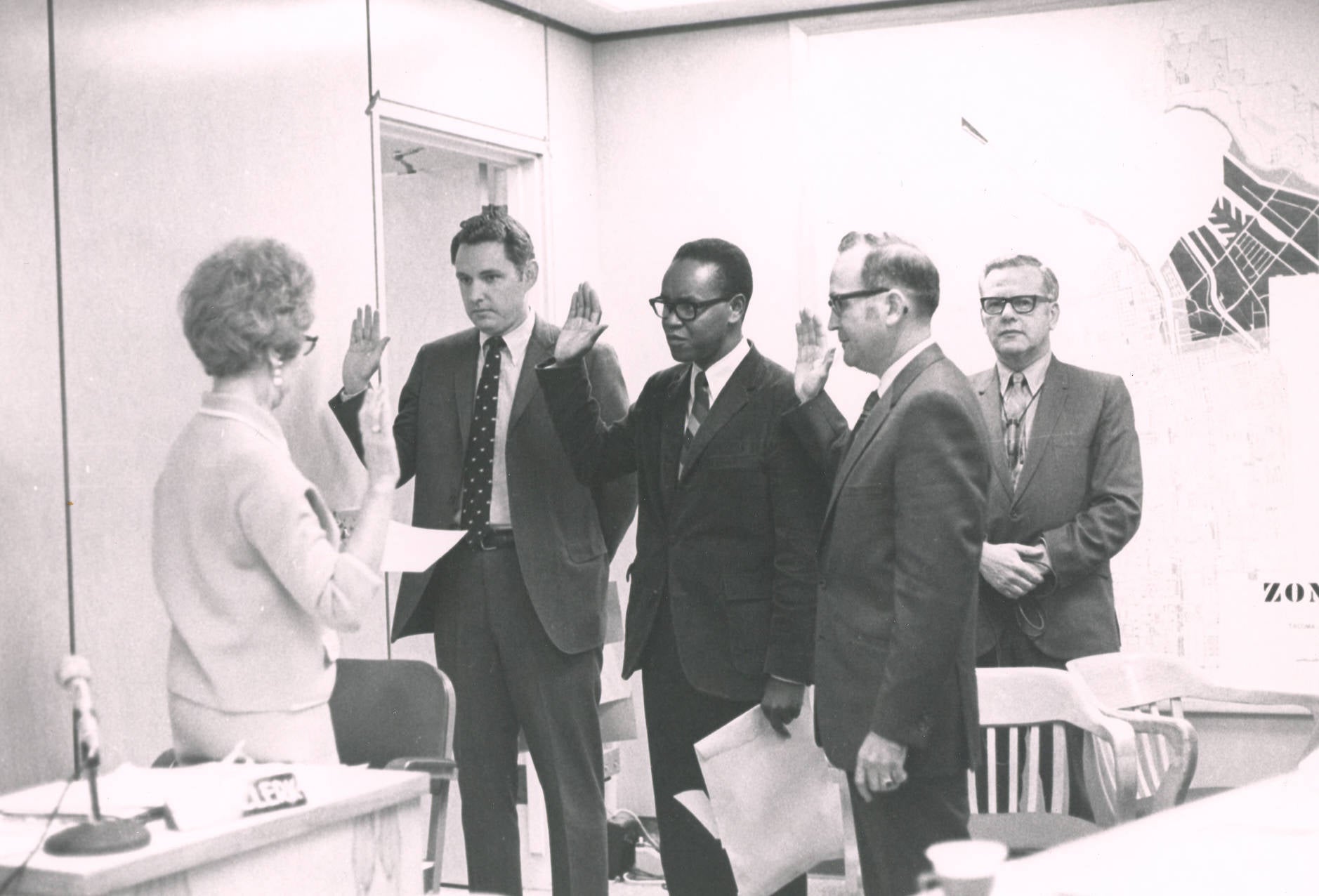 He made the system work for him, and in doing so made certain it would work for all of Tacoma and Pierce County.

“Once I got my house built, I was very much interested in other places that were not serving black people. Lunch counters, restaurants, Rotary Club, or other organizations within the city. It became a real thing for me.”

“I had the feeling that I was in the Armed Services and I’m not out here for nothing. I’m not going to die for nobody for nothing.” 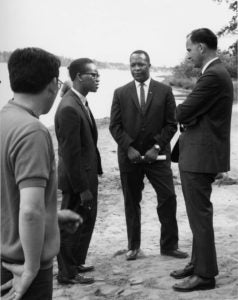 Gov. Dan Evans speaks to Harold Moss and others (1968)

Like many Tacomans, Harold Moss came to this region with the military. He stayed because of an envisioned opportunity to help make Tacoma better for everyone, but especially to improve the civil rights of African-Americans.

“The honest to god truth is that it took years for me to realize that what I had done was unique and I didn’t know why. I didn’t know how I was expected to get elected with so few black people. If every black person in Tacoma had voted for me I would still lose. But in the end I found out from a friend of mine in politics, she said to me simply ‘Mr. Moss, you put your name in and work hard. If they like what you’ve got to say they will like you and they will vote for you.’”

Tacoma and later Pierce County did vote for Harold Moss. He served as the first African-American city councilman and later as its mayor. Moss’s self-taught rules for political success were simple.

“I could do that and reach those levels because I have found that the answer, for me, was treating people equally and fairly. That’s the most important thing. When people come with their grievances and concerns with city government, give them the best. Give them your fairest; give them an opportunity to feel that government really does care for them regardless of skin color.”

And so he became the very bridge between communities and an inspiration to others to become local politicians too. Tacoma is a community of communities because of people like Moss.

“Progress is a hard word to come by. I sometimes worry about the word progress, because it indicates understanding. That understanding is hard to come about.”

Harold instead talked about change. But change with an eye towards progress. Like a mystic, his vision for understanding was simple, and not so simple.

“We’ve gotten a little better. We’re concerned with it, but it is deeper than that. It has to be lived and talked through.”

That’s what Moss did. He talked through it, and became that man who worked alongside you, who inspired you. Moss inspired other African-Americans to serve on city council, county council, and as mayor. He’s a builder. He uses bricks of respect.

Moss is right there with Foss, Staley, Stanup, and Stafford. He is a hero who served Tacoma and whose legacy will continue inspiring future heroes. Like many, he wasn’t from here originally.

Tacoma chose him, or he chose Tacoma. However those things work.

To be a real part of a city, Moss asked all people to participate.

“You can’t be part of the community unless you are a part of what its governance is about. If you can’t make a contribution, you are not a part of that. I encourage young people to get involved, to run for election, because that is representing all of us.”

He knew there were challenges. It is inherently difficult to build community organically.

“It ain’t all that easy always, but it’s doable. It can be done. You can make a contribution.”

In a time of civil unrest, a period in the 1950’s where men were not judged on merit alone, Harold Moss served in the Army, moved to Tacoma, and discovered his cause. He simply wanted to share his American dream with as many people as possible. Part of that dream became inspiring others to do the same.

“I would just do everything you can to encourage you to make our community whole. By whole, I mean equal justice for everyone and to value equal racial justice with a discrimination free society. We’re an awesome people. I’m telling you – America is an awesome place to be.”