Tacoma is booming. With major projects in the Brewery District, at the Convention Center, Proctor, Point Ruston and more, the skyline is changing. This isn’t the first time that Tacoma’s skyline has changed. 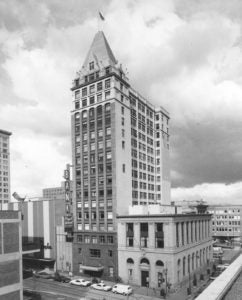 Back in 1911 the National Realty Building (now Key Bank Center) dominated the young city. It wasn’t just tall for Tacoma. It was the tallest building in Washington and even, for a time, the tallest building west of the Mississippi. Tacoma’s rising spirit was on display. The 232-foot marble building was the vision of Frederick Heath.

For a 60-year period Heath’s vision defined Tacoma. From 1891 to 1953 Frederick Heath worked to create a Tacoma that he saw in his mind, painting a skyline for the South Sound. More than a century later his buildings remain. They are not just a legacy, but part of the tangible art that took Grit City from an era of wood and mud to brick and marble.

There are a few looks he’s known for – Swiss-style ski chalets, multi-story brick schools with turrets, and public spaces. All along our hills and shores, his buildings remain tall, proud, and iconic.

Titlow Lodge and Paradise Lodge on Mt. Rainier were both Heath projects. While the Titlow Lodge went through massive re-purposing and is now a smaller communal space at the park. Paradise remains true to his original vision with steep sloped roofs, huge exposed wood beams, and comfortable fireplaces.

Many Tacomans went to his schools. Stadium, Lincoln, Fern Hill, McKinley, Central, Oakland, and Park Avenue are just a few of his designs. Heath spent a significant part of his life as the official architect for the Tacoma School District. Tens upon tens of thousands of students wandered his halls, entered his class rooms, and cheered for their classmates in the famed Stadium Bowl. 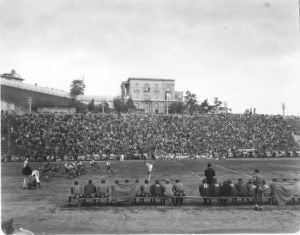 Stadium Bowl was among his designs, as well. Heath’s projects hosted Presidents and major football teams. His spaces were and are our spaces. They are where we gather, play, worship, and work.

A servant to the city, Heath was a member of many local philanthropic, commercial, and fraternal organizations. He participated in that which he crafted.  Pythian Temple on Broadway was not just his design; he was a Knight of Pythias who participated in the order’s fundamentals of Friendship, Charity, and Benevolence.

Heath’s own values were displayed in his public works. The Nereides Baths provided Tacomans the first public swimming pool. His passion for public spaces was also displayed in his work with various churches, schools, and the famed Greek Theater in Los Angeles.

We walk through and by Frederick Heath’s works daily. The National Realty Building, like a raised fist bursting from the sea, declared “Tacoma” to builders around the nation. The City of Destiny was open and ready for greatness, people, and to fulfill its promises and hopes.

Tacoma Defiance’s next home match is Friday against San Antonio FC, against at 7:00 p.m (tickets available, or join us on the Party Deck).