Step into the right Tacoma coffeeshop on a drizzly Monday and you’ll see the usual cast of characters. Parents coddling toddlers, home office transplants, and in the corner a well-built man reading a menagerie of comic books – while this bookish goliath favors something indie, he’s not ashamed to tote the classics.

Much like some of the muscular heroes in capes he has loved since childhood, this hulking figure pushes the limits of his cotton t-shirt to the wearing edge of fray. His hair is bleached to a bright blonde no average Joe could pull off. Good thing he’s not even close to being one.

Raised in Lakewood and South Tacoma, Ethan read comic books back before Marvel’s Cinematic Universe gave the industry a second or third wind.

He was also into wrestling back when it filled late-night syndicated television stations in poor time slots. Well before it was the billion-dollar enterprise seen on broadcast television today.

In the years between then and now Ethan HD became someone no one would call a nerd or geek. 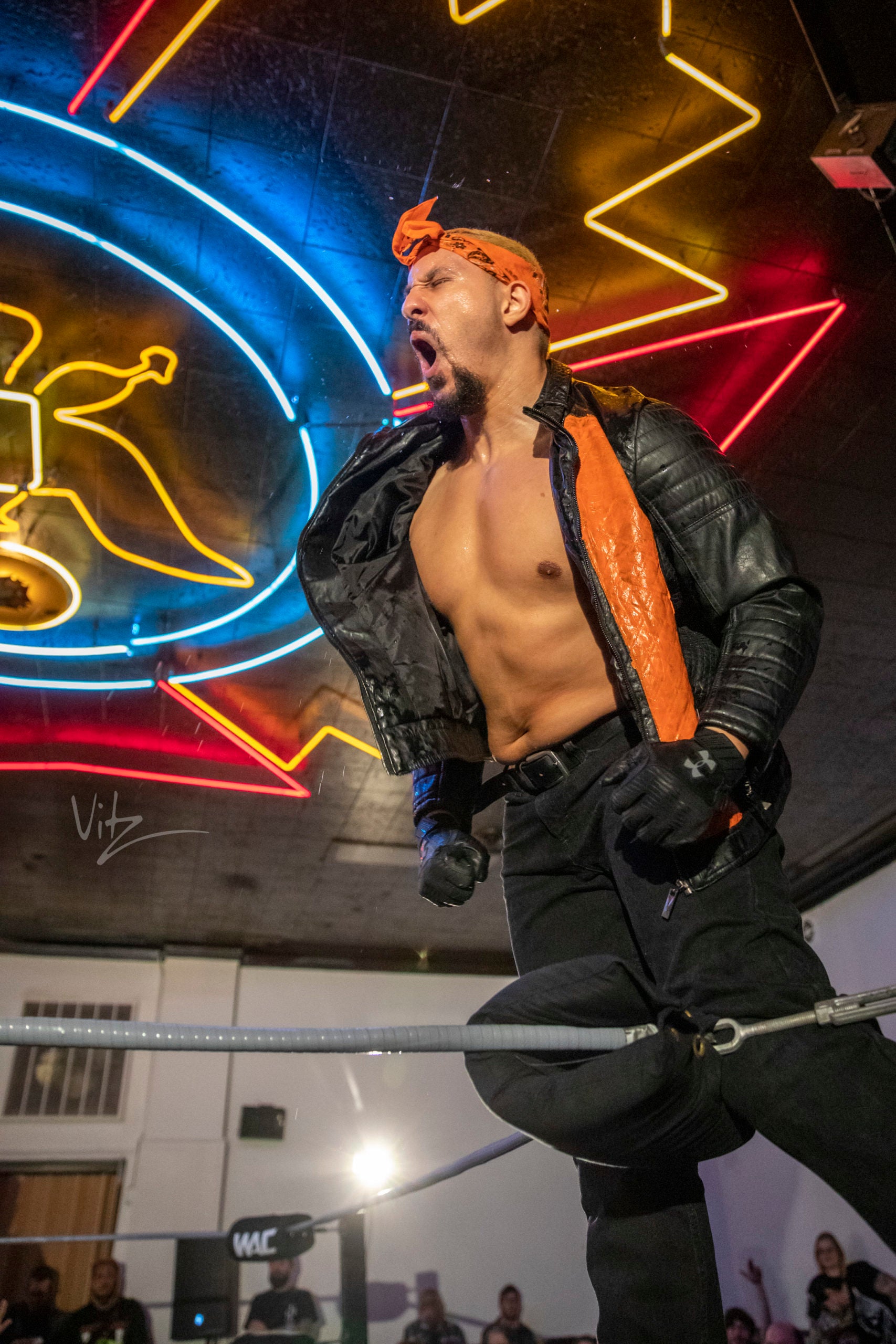 Ethan HD on the ropes at Without a Cause: 2020 (photo by Vitz Photos)

Ethan HD wrestles with Defy Wrestling, both as an individual and with tag-team partner Mike Santiago. Mike and Ethan form the duo American Gunz, multi-time title holders and proud Tacomans. Defy is an indie wrestling circuit that books acts from Japan, China, Canada, and Mexico to supplement a stable of rising talent that calls the Pacific Northwest home.

Most Defy events are in Seattle, but they also pop into Portland, Everett, and Tacoma. Their venues are a lot like Cheney Stadium – intimate with a passionate fanbase close to the action. The few hundred fans are packed into a space where they practically feel the action.

On days that he’s not boot stomping indie wrestlers, he’s at Destiny City Comics, now as the owner. 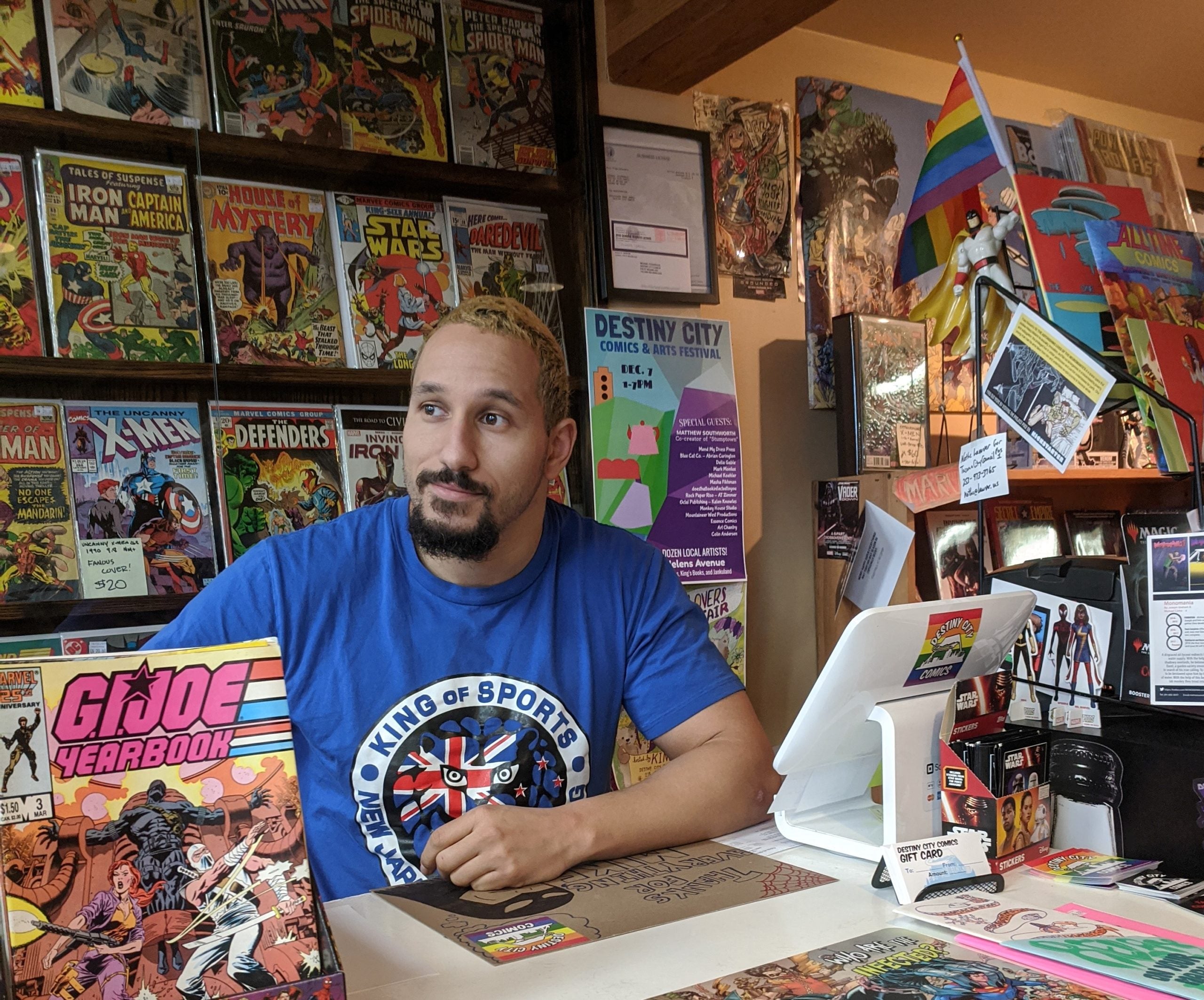 A couple years ago, you would also find him in the aisles shopping as a customer.

“The first time I went in there, I loved the place. I love King’s Books next to it. There’s an independent feel. What stood out about Destiny City when I was going there as a shopper is that every comic book shop that you go to has DC stuff, Marvel stuff, here are the back issues, a wall of pop vinyls, and that’s it. At Destiny City there were all these indie comics that I had never heard of. Mike [the former Destiny City Comics owner] had a bunch of comics by local artists, local zines, and all this stuff that was very unique.”

Young Ethan grew up thinking that comics were for nerds, and he was one of them. That’s not really the case anymore. Like soccer in Puget Sound – wrestling and comics are now mainstream.

“It feels vindicating. I was reading these comics 20 years ago. Comic books were a nerd thing, even if you weren’t a nerd you were categorized as a nerd just for reading comic books. Every TV show and movie propagated that. Comic books are a 13-year-old boy thing, and that’s strictly it. To fast forward to 2020, now every comic book property is going to turn into a show – it’s cool.”

The medium is now is on streaming platforms, standard television, and obviously big budget movies. That potential for financial success means that new stories are being told. Authors and artists are pushing the medium beyond where it has been, and that excites Ethan HD for more reasons than the fact it’s good for business. He loves to see all the creativity.

“It’s cool to see all these things. It encourages comic book artists and authors to develop stories. In the 90s, stories were more simple. This person wants to destroy the world and look at Superman stop him. It was lather, rinse, repeat. The storylines are more intricate. The side characters are better.”

Another welcome change? In 2020, heroes come in all shapes, sizes, and color. They come from all walks of life, from every corner of society. Ethan HD appreciates the change.

“Growing up as a comic book fan in the 90s, every hero was white or an Asian who knew karate. I remember being a fan of Luke Cage because he was the only black superhero I knew. He must have been special because they gave him superpowers. Now, seeing this more diverse palette – and seeing how women have developed in comics – is great for people to see themselves in comics.”

Growing up as the only biracial kid in his class, the representation was important. He saw a hero he could connect with in a powerful black man in control of his own destiny.

Now, nights spent coaching wrestling and flying high from the top rope are Ethan’s chance to play the hero. At 5’8” and nearly 200 pounds, the some-time heel (that’s wrestler speak for villain) flies around the mat and explodes off the ropes. His performances are athletic marvels.

There was a WWE tryout back in 2012. Too corporate and glamourized for Ethan.

Since then, he’s run the indie circuits. He spent a stint coaching in India as well. The ability of circuits like Defy Wrestling to rapidly respond to, and include, fans appeals to wrestlers like Ethan HD. They don’t want to climb the corporate ladder. Instead, they want to focus on wrestling as an art form with all the sweat and bruises required.

His defiant, independent spirit comes from Tacoma and pops into how he lives his comic and wrestling lives. Tacoma is his heroic power source.

“I told myself ‘I will never live in a city that doesn’t have graffiti.’ There’s something about Tacoma where I feel that people from Tacoma are proud of where they are from. A lot of that is because people try to bury Tacoma a little bit. People in Seattle are like ‘oh you live in Tacoma.’ But to me that’s a badge of honor.”

He wears that badge proudly while wandering the streets of Stadium or walking the shore of the Foss Waterway down by the museums.

Tacoma’s his city. His Gotham. His Metropolis. If some supervillain invades, the buff nerd will use his brains and brawn to defend the South Sound. On the daily he’s just a man that loves three things through and through – comics, wrestling, and Tacoma, Washington: City of Defiance.

Defy’s upcoming ladder match between Artemis and Schaff is the first ladder match they’ve done. The title bout is part of their Kings of Crash event on February 21.

Ethan will be defying people’s expectations of what a nerd is at Destiny City Comics and wandering his favorite city, graffiti and all.