Hitting a baseball is nearly impossible. You’ve heard all the clichés. One of our favorites: “It’s a round ball and a round bat, and you got to hit it square.” It’s credited to Pete Rose, but who really knows?

It’s a full time job to be a great hitter, and somehow Seattle Mariners prospect Cal Raleigh is finding a way to do it from both sides of the plate. The switch-hitter has just 160 professional games on his ledger and already has a staggering 37 home runs.

Think of the amount of work that a professional ballplayer is putting in every day. From tee work, to batting practice, to some weird stretching routine probably? Anyway, it’s a lot. Now double it. Everything the 23-year-old does as a left-handed swinger, which is where a majority of his home runs have come from so far, he has to put in that same effort as a righty. Couple his raw power with the fact that he’s a catcher, and you’ve got a dude who is putting serious time into his craft.

It’s not easy to play any position in Minor League Baseball. But a catcher? Not only do you have to know your own game, you’ve got to know the man standing 60 ½ feet in front of you. You need to know his pitches and what he’s comfortable throwing that day.

And in the Minors, you’re regularly completing the battery with players you hardly know. Pitchers get signed, promoted, re-assigned and make rehab appearances. At any given time there’s at least 13 hurlers in a clubhouse, and Raleigh has to make sure he’s in sync with all of them.

Let’s not forget that clubhouse on the other side of the diamond. The one with a dozen hitters who are all battling their way to the Big Leagues. You guessed it: Raleigh has to know every one of those guys too.

He needs to know if that big lefty slugger can’t handle a hard fastball down and in, and he definitely needs to know if he can. It would be bad to throw him one if he can. Raleigh’s calling the shots from behind home plate and needs all the information he can get to do it right.

So, how do you get that information? Well, there’s hitters meetings and pitchers meetings, usually at the start of each series. Catchers are the only ones going to both. Coaches are providing tendencies of the hitters and pitchers you’ll face that weekend. Like a war general before battle, they’re giving the strategy for how you’ll attack the opposition.

Then, for catchers, it’s off to watching film of all the opposing hitters, looking at scouting reports and spray charts. Raleigh is getting to know the bad guys better than they know themselves. 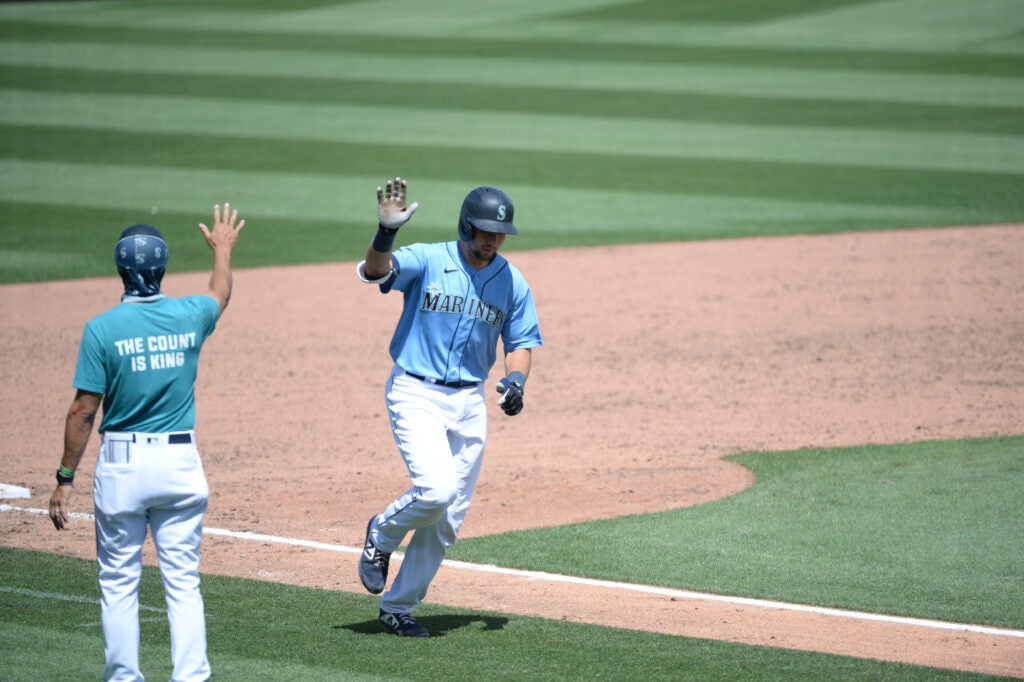 Cal Raleigh rounds third base and gives a socially distanced high five after hitting a home run in an intrasquad game at Cheney Stadium. (Jeff Halstead, 2020)

When all is said and done, there’s so much information that a switch-hitting catcher needs to retain, they’d have to build a new wing of the National Archives to store it all. Yet, none of it matters if Raleigh can’t translate theory into results.

But Can He Play?

2019 was the Florida State product’s first full season as a pro. He slugged 22 homers in 82 games with Advanced-A Modesto, which would put him on track for over 40 in a 162-game season. 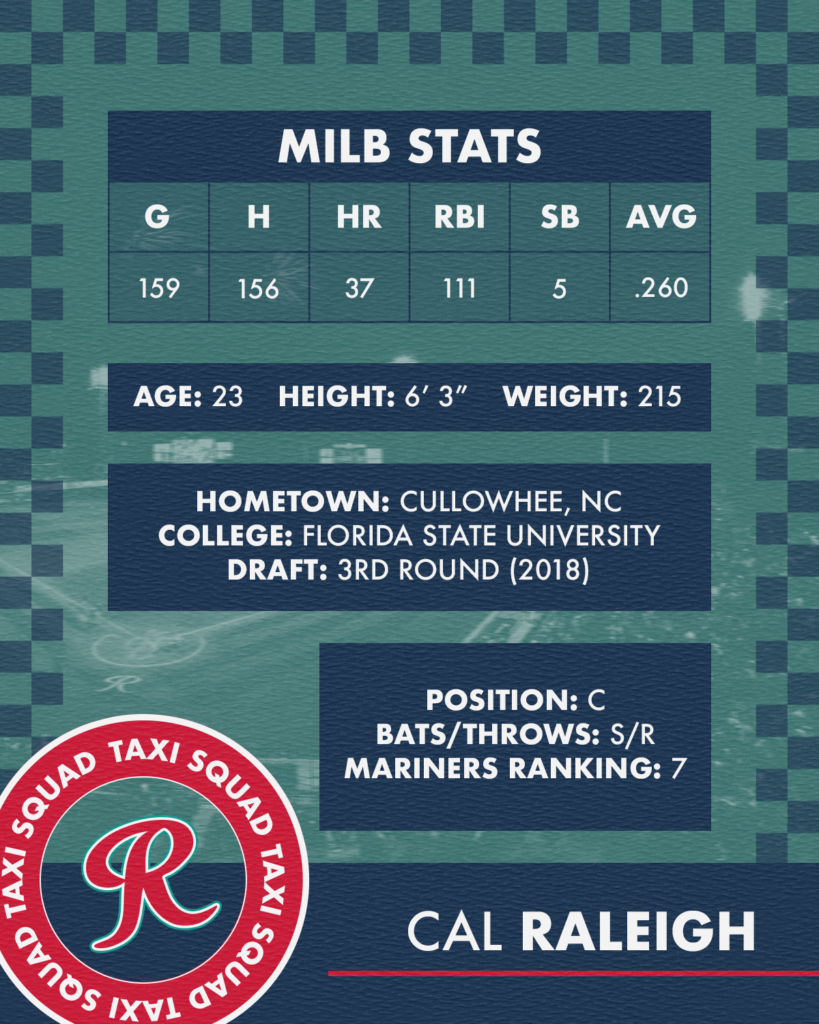 He hit safely in 13 of his last 14 games with the Nuts, clobbered 9 home runs and drove in 18 runs over that two-week stretch. He saw his average jump from .246 to .261, and he saw himself hop on a plane to Texas to join Double-A Arkansas in Midland for his Double-A debut.

It took the Cullowhee, NC native three weeks to tally his first long ball with the Travelers, but he totaled 7 in Double-A before season’s end.

What impressed most, however, was his defensive improvement. He joined the organization as an offensive catcher, who the Mariners expected to hit home runs. Then he threw out 34 batters (30%) in 2019 and caught the attention of those people who make all the top prospect lists.

He’s got an accurate throwing arm, and he’s clearly putting in the time to be the best player he can be, so expect his footwork, receiving and game-calling abilities to be on point by the time he gets to Seattle.

For the time being, Raleigh is perfecting his game in Tacoma. We’re excited to watch the 6-foot-3 switch hitter swing from the right side of the plate. Last year, 24 of his 29 home runs came as a lefty. It’s not that he is overwhelmingly more powerful from the left side, but Raleigh didn’t get many opportunities against lefties in 2019. We want to watch him put a few dingers in R Yard before summer’s end.

We’ll keep you updated on Cal Raleigh and the rest of the Taxi Squad as they stay game-ready for their chance with the Mariners in this year’s abbreviated season. For the latest and greatest on the Taxi Squad, the Tacoma Rainiers and all things Cheney Stadium and South Sound culture, follow us on Twitter, Facebook and Instagram, and sign up for more at WeRTacoma.com.