“You are who you’re around.”

As one of millions of kids with a lofty dream to get to the big leagues, Braden Bishop’s parents ingrained this adage into his life. The words have nothing to do with baseball, and instead directed the now-Tacoma Rainiers outfielder to surround himself with greatness, not in ballplayers, but in people. With the support of those wise parents, Suzy and Randy, Bishop put himself in positions with great people all the way from St. Francis High School in Mountain View, CA to the University of Washington and finally to Tokyo, Japan where he made his Major League debut with the Seattle Mariners on March 21. Bishop’s baseball career has taken the right launch angle as the 25-year-old has emerged as a key prospect in the Mariners system, but the former 3rd round selection’s story cuts much deeper than an awkward slide into third base. 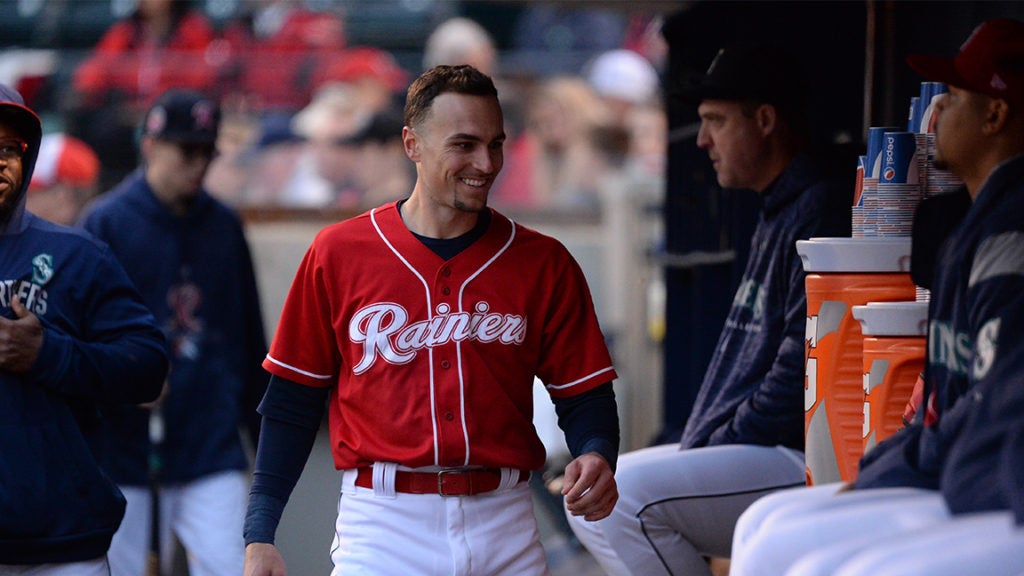 “My mom was diagnosed in 2014 with early-onset Alzheimer’s which affects less than 4 percent of the Alzheimer’s population,” Bishop said.

A tough situation like his would be unbearable without a strong supporting cast, but Bishop was able to lean on his dad and brother, Hunter.

“Any time there’s struggle, you find a way to become closer to people who are directly affected,” Bishop said. “So, while it’s torn our family apart, it’s also brought us closer together.”

After his mom’s diagnosis, Bishop knew that his time had come to take his experience, along with the strong morals that his parents instilled, and use them to help others.

“I’d always known I wanted to get out and serve, but didn’t know in what capacity,” Bishop said. “I didn’t want it to be personal, but when it became personal, I saw it as an opportunity to make a positive out of something that I knew was going to tear my family apart.”

Bishop responded to the news by starting the 4MOM Charity, a non-profit organization dedicated to terminating the disease that affects millions globally every day and is growing rapidly. As his mom’s condition worsens, he’s finding strength to build others and help them improve their situations.

“I want to try to be a helping hand,” Bishop said. “[4MOM] started with a small group and has grown to a much bigger group that can really help people. I’m excited to see where we can go with it and how we can educate people and be caregivers.”

His once humble operation has turned into 20 folks who run day-to-day operations, while the number of volunteers and advocates has grown to the hundreds.

While Bishop continues to make an impact in his community, his play on the field has stayed consistently dominant, so much that he earned a spot on the Seattle Mariners roster for their opening series against the Oakland Athletics in Japan in March. For a man dedicated to surrounding himself with greatness, it was in Tokyo where he found himself swapping places with a legend, replacing Ichiro Suzuki in right field as 50,000 people gave the most decorated Japan-born player ever a standing ovation for the last time in his career.

For Ichiro, it was his last time on the field. For Bishop, it was his first appearance in a Major League game, getting a welcome like no other player ever will.

“He’s one of the most well-known icons that the game has ever had,” Bishop said. “That moment was about him. It was an honor for me to go in after him, but then it was like… ‘Whoa, it’s my debut now. I gotta lock it in.’ In the most emotional situation possible and the most emotionally filled stadium, it was a unique way to make my debut.”

In moments like replacing Ichiro in Japan, many ballplayers might be blinded by the big lights, but for a well-brought up Braden Bishop, he embraced the once-in-a-lifetime atmosphere and walked away with the right perspective.

“Minute one to the last minute, I thought I did a good job of taking it all in,” Bishop said. “I learned a lot and got to experience a totally different culture.”

As for swapping out the future Hall of Famer, Bishop’s personality-focused mindset forced him to see the phenomenon in a different light.

“I have such an appreciation for greatness, how guys work and how they carry themselves”

“That’s more impressive to me than just what their name is. It’s everything else that embodies who they are as people.”

Bishop is on the fast track to becoming a household name in Washington baseball and Tacoma will get his best effort as a ballplayer, but more importantly, as a person, for as long as he’s in the South Sound.

“The overwhelming thing that I’ve learned in my career on and off the field is to invest in where I’m at, the people there and the things I can to do help serve this community.”