As those words, a traditional sign off from an icon, filled airwaves decade after decade, they left Washington’s sports fans with the notion that win or lose, their time listening to the rich voice on the other end of the radio was valuable. Hall of Fame broadcaster Bob Robertson ingrained those words into generations of Washington sports fans. 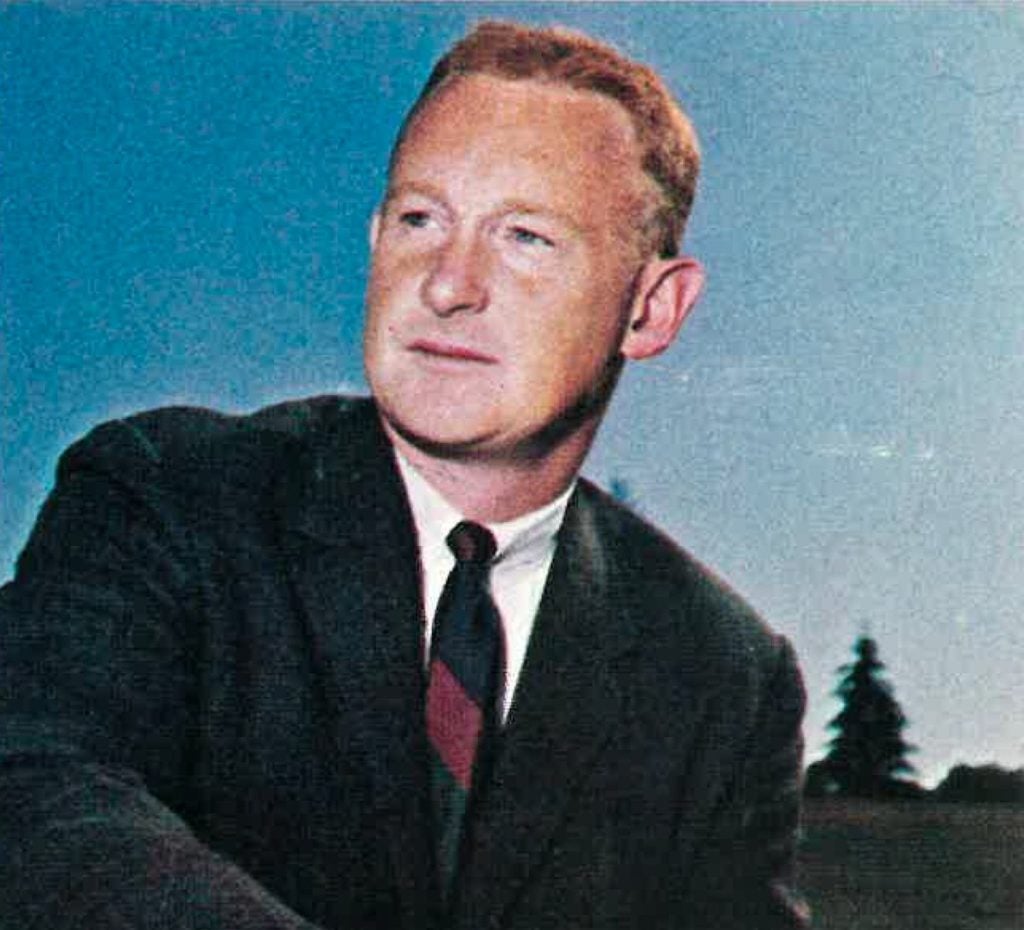 Bob Robertson was the original voice of Tacoma baseball beginning in 1960.

“That started when I got into broadcasting back in Bellingham where I was going to school at Western Washington,” Robertson reminisced. “All the major network broadcasters had a personal open and close. They were all different, and I was trying to find one that fit me. I’m not even sure how I fell into it, but I hit that certain combination at the end of one broadcast. I haven’t come across anyone else using it in the last 65 years… and you better not, that’s mine now.”

Bob passed away on Sept. 6, 2020, leaving an everlasting legacy across broadcasting, Washington sports, and right in the heart of Tacoma at Cheney Stadium. As the very first Tacoma baseball broadcaster, Bob was heard on the South Sound airwaves going all the way back to 1960.

Living over 91 remarkable years, with a career that spanned nearly 70 years, Robertson had the ability to change the dynamic of a room with only his voice. At the end of his life, Bob wasn’t putting on the headset every Saturday or traveling across the western half of the U.S. with the Rainiers anymore, but “Bob Rob” wasn’t shy about showing his ageless smile around Cheney Stadium either.

When Bob frequented R House in 2019, he typically positioned himself where he was most comfortable: on the 2nd floor, third base side, seated in the Bob Robertson Broadcast Booth, a space deservedly named after himself. Without fail, he’d sit just to the left of Mike Curto, Tacoma’s everyday play-by-play man.

“I’ve had a great time working with Bob and it’s always fun to hear his stories about calling games in an earlier era of Minor League Baseball,” Curto said in October 2019. “It’s a joy when he stops by the booth these days. There are always fans who want to stop by and shake his hand.”

Settling in hours before first pitch, often times on days when he wouldn’t even be hitting the air, Bob was there. After prepping weekly broadcasts for decades, lighting up a room while skimming game notes and chatting about who’s hot and who’s not is what the legendary Robertson knew best.

It kept Bob involved in the game, which was his goal since jumping into broadcasting. He often reminisced on the joys of being in the clubhouse, talking shop with the Tacoma Giants players of the 1960s.

“I got to know the guys pretty well and they were all good kids. They were closer to my age back then,” Robertson joked. “It was fun being around them. We were talking baseball all the time. I wanted to be part of the game and broadcasting was how to do it.”

The relationship between Bob Rob and Tacoma professional baseball traces back to the beginning. When gargantuan wooden beams were hung above Cheney Stadium’s blue seats and the lights were flipped on in 1960, Robertson was behind the mic painting a picture of every Tacoma Giants game for South Sound listeners.

When the club traveled the country to various Pacific Coast League outposts, Bob stayed home, recreating the game in a Tacoma studio using ticker tape messages from Spokane, Vancouver, Portland and other cities where the team no longer journeys to in the 21st century. As was standard practice at the time, he would add analogue sound effects to give the listener the audio impression of the stadium.

“Western Union would transmit the information in an abbreviated form and that would be provided to me sitting in the studio in front of the microphone,” he explained. “Whoever was the receiver for me would get the information from the sender at the ballpark and I would make it into a sound-a-like baseball game. All teams did it early on. If they had broadcasts, it was not economic for smaller market clubs to send broadcasters along on the trips.”

How good was Bob at recreating a broadcast?

“I fooled the owner one time,” Bob said proudly. “[Former owner] George Foster was listening to the Tacoma game on the radio on the way home from the airport and they didn’t tell him until he got to the ballpark that the game wasn’t at Cheney Stadium. He grumbled about how we fooled him on that.”

“And people would see me in the grocery store in the afternoon and ask, ‘did you get back from Edmonton today?’ I would smile and say, ‘no, I wasn’t in Edmonton.’”

Later in his career, Bob recreated football, basketball, and hockey, giving people a realistic representation up to 30 minutes after the action took place across the country.

“He was the last broadcaster regularly recreating games,” Curto said. “That required true talent and an active imagination.” 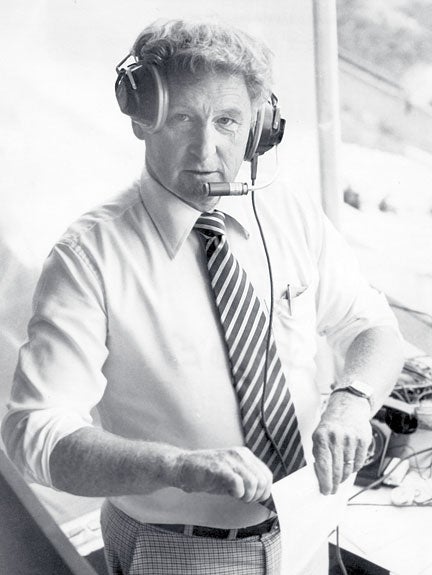 The Fullerton, CA native’s broadcasting ledger reads deeper than his time as Tacoma baseball’s full-time man from 1960 through the late ‘90s. Robertson called every sport under the sun, from hydroplane races to wrestling. A former soccer broadcaster, the Hall of Fame announcer was Washington’s Soccer Man of the Year in 1983. His most well-known work came with Washington State athletics, where he served as the lead broadcaster for Cougars football and basketball for over 45 years, sans a brief stint as the voice of the Washington Huskies from 1969-71. He also served as an analyst for the Cougs from 2011-18 before calling his final broadcast on Oct. 6, 2019. He was already a long-established College Football Hall of Fame member.

In Sept. 2014, Bob crossed paths with another Hall of Fame college football broadcaster and fellow WSU alum, Keith Jackson. The conversation shared between two legends in the twilight of their careers was broadcast over the Pacific Northwest airwaves during halftime of a Washington State matchup with Portland State. It ended in audible crying from Robertson as the two embraced.

“I do sometimes get to thinking about it and I get a little teary,” Robertson recalled. “In broadcasting, you have to be able to handle things like that. That was probably the hardest individual time I had on the air because I realized that we were both pushing toward the end, and there wasn’t going to be Keith Jackson or Bob Robertson after a while. That was a little tug at the heart.”

Jackson died in January of 2018. The memory of that interview is solidified in Washington sports history. Robertson said the chemistry stemmed from a level of respect and understanding for each other’s shared story as broadcasters of a golden era.

“We really weren’t connected much in family or work, but we were in the same business and often times had the same opinions,” Robertson revealed. “We didn’t have as close of a personal man-to-man relationship that a lot of folks gathered from that interview, but we both had the same feeling. Keith was getting out of [broadcasting], and I hadn’t started thinking about it yet. It wasn’t very long until I did. It was a difficult thing not to get a bit choked up.”

In his final years, Bob’s appearances on Rainiers broadcasts were a pleasant surprise to those whose sports experience has been defined by Robertson’s golden voice since well before they can remember. With every measurable broadcast achievement already checked off the list, Bob was still open-minded to expanding his résumé when baseball returned to Cheney Stadium.

“Maybe we’ll get a cart and I’ll drive the pitchers in from the bullpen,” Robertson suggested. “I’d have to check with my family to see if they’ll let me drive, but I think I could handle that as long as I stay in fair territory.”

Even in 2019, it wasn’t uncommon to see the legend walking through the concourse on his way to the Bob Robertson Broadcast Booth, but crossing paths with Bob wasn’t an experience that should have been taken for granted either. Even though the Rainiers family will deeply miss seeing him at Cheney Stadium, Bob’s legacy will always be felt around the ballpark. If you glance up at the Bob Robertson Broadcast Booth in 2021, take a moment to recognize and embrace that you’re seeing a tribute to a local legend. One whose message of sportsmanship, loyalty, and passion helped define the rich culture of sports from the South Sound throughout Washington and beyond.