Allie Long began the season determined to work her way into the U.S. Women’s National Team squad for the World Cup in France. Freshly returned from victory on the game’s highest stage, Long knows the same determination will serve her well for Reign FC.

The midfielder said that making her World Cup debut at 31 was a career highlight.

“I was so excited,” Long said. “It’s the greatest honor to represent your country. To be able to do it on the game’s biggest stage – I’ve always said it’s been a dream of mine, to actually live it was so special. I enjoyed every single minute of it. I never take for granted when I play for the U.S. National team. It’s special every time.

“This one was a little more special,” she added, laughing. 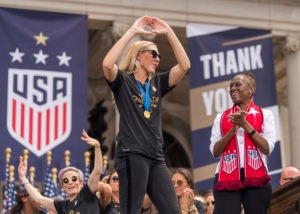 New York, NY – July 10, 2019: The USWNT celebrated with a ticker tape parade down the Canyon of Heroes followed by a presentation at City Hall.

The revelries became a blur, but the victory parade in New York City was unforgettable. The Northport, N.Y. native had chills seeing streets she had driven down in her childhood shut down and lined with supporters to welcome the team home.

Long doesn’t feel that returning to domestic play will result in any sort of letup, physically or emotionally. The determination and drive that led to her to the World Cup will continue to push her to excel in the NWSL.

“I always want to grow,” Long said. “I don’t even think that I’ve become the best I can be yet. You have to stay hungry and want to be the best you can be. The fact that I’m always analyzing and very critical has pushed me to be even better.”

Long also thrives on fierce competition. The opportunity to face the Portland Thorns, with whom she won two NWSL championships, should provide the atmosphere that Long says forged her as a player.

“I love a good rivalry,” Long said. “I love the hype around it. It brings out the best in me. I look forward to these games. I respect every single person in the stadium in Portland. When I went back last year they gave me a standing ovation. Now that I’m on the other side, I don’t know if they’ll always love me, but that’s fine. I love that aspect of a rivalry. I love someone that talks smack and backs it up. That’s what makes sports great. I’m all about it and I love being on either side of it. The fact that I’m with Reign FC, I think this is the best player-for-player club I’ve been on with the best coach I’ve had. I feel so lucky. I’m right where I need to be in this time and this moment to reach all the goals that I have for myself and the club.”

Long still has more that she wants to accomplish with her career, despite this being a banner year. Now, she hopes that her success with Reign FC and the U.S. WNT will continue to inspire the next generation of players, the same way she was as an 11-year-old watching Brandi Chastain score the winning penalty in the World Cup.

“Before the tournament started, my only hope was that our team could ignite what I felt the women’s team in 1999 did for me. That was my only hope, that I can give the next generation what the ‘99ers gave to me, because it has propelled me my entire life and made me who I am as an athlete and a human being as well.”