Just as Summer Camp was wrapping up for the Seattle Mariners, the club’s No. 2 prospect Julio Rodríguez suffered a hairline fracture in his wrist while diving for a ball in a drill. Dude goes hard, even in practice. But the injury presumably ended the summer for the teenage outfielder, which means he’s missing his first chance to take some hacks at Cheney Stadium with the Taxi Squad.

We’re not sure who landed on 2020 in Jumanji, but please make it stop, because we could all use some good news and we can’t figure out how to get the orangutan out of our spare bedroom. While we wait for the next player to roll, let’s look ahead to better days when the 19-year-old phenom is back on the field, eventually playing in front of a packed Cheney Stadium. Here are 5 reasons to stay stoked about Julio Rodríguez while he supports his boys from the dugout.

1. The moment is never too big

Rodríguez played his first games in the U.S. in 2019, starting his 18-year-old season with the Single-A West Virginia Power. In 67 contests, he drove in 50 runs and had an OPS of .850. Solid digits for the No. 2 prospect in one of the top Minor League systems. 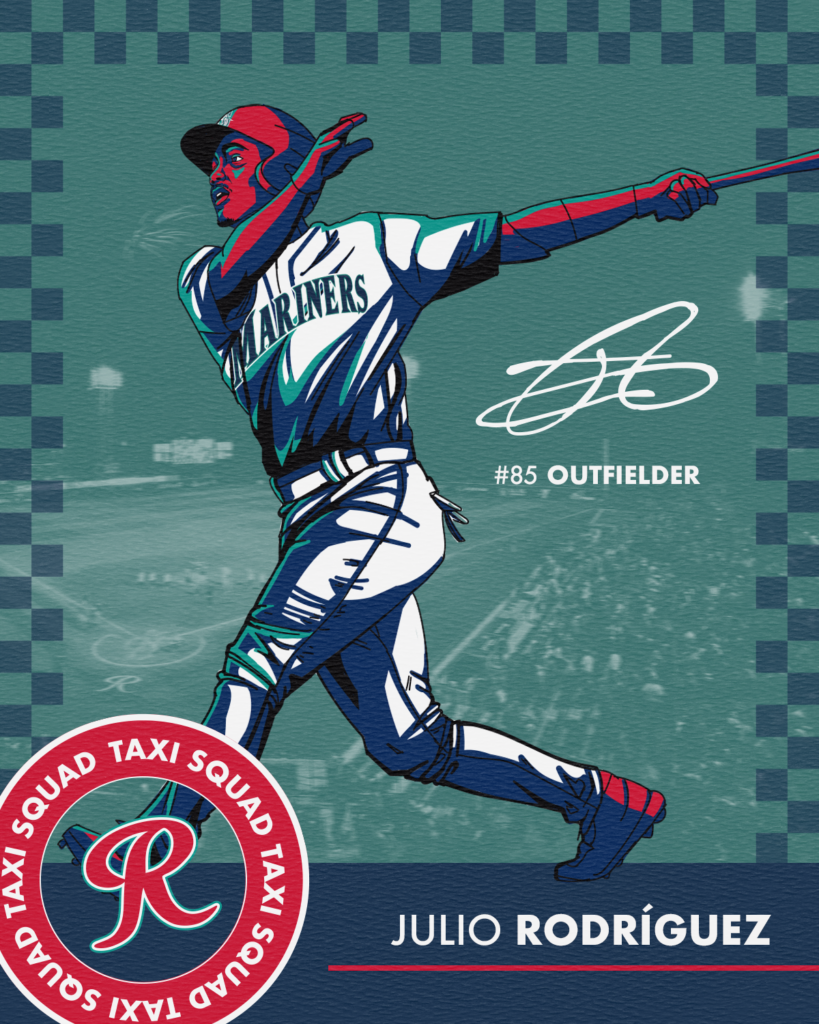 But it was when the Mariners challenged Rodríguez and sent him to Advanced-A Modesto where things got… Nuts. Get it?

In his Cal League debut on Aug. 16, the Loma de Cabrera, Dominican Republic product went 4-for-5 with a home run and 4 RBI. Surely it was a fluke, yes? Nah. In just 17 contests he had nine multi-hit games, including five with at least three knocks and a 5-for-5, 4 RBI effort on Aug. 28 against Stockton where he raised his average to a video game worthy .587.

The M’s wanted to see what this guy, barely old enough to cast a vote, would do in just three weeks at a higher level. He wasn’t just good, or even great, he was the best player in the league.

Rodríguez held his own in Summer Camp too. He ripped a double off the center-field wall against Mariners starter Kendall Graveman the same day he injured his wrist.

Julio has shown so far that no matter who is on the mound, he’s going to shine. The composure he’s shown when the lights are brightest is a trait not easily found in a 19-year-old.

2. We need more joy in the world

This might be the simplest and cheesiest reason to be optimistic for this young man’s career, but take a look around. There’s a lot happening, and it’s an unsure time for us all.

We don’t know what tomorrow will bring, but we can say for certain that seeing joy and positivity will naturally make us feel a little better.

Look no further than Rodríguez, who is already well-known for exuding pure happiness. Check out this anecdote from Director of Player Development Andy McKay, talking about a moment when Rodríguez failed, kept a huge smile on his face, and bounced back in a big way.

You can't bring @J_RODshow down.

We can all learn a little something from the kid here.

3. That Mariners outfield, though

We don’t have a great nickname for them yet (Three Amigos? Lew Crew? Kelenic’s Little Cuties?), but the potential Mariners outfield of Kyle Lewis, Jarred Kelenic and Julio Rodríguez should put every Mariners fan on the edge of their seat, and the rest of the league on fearful notice. 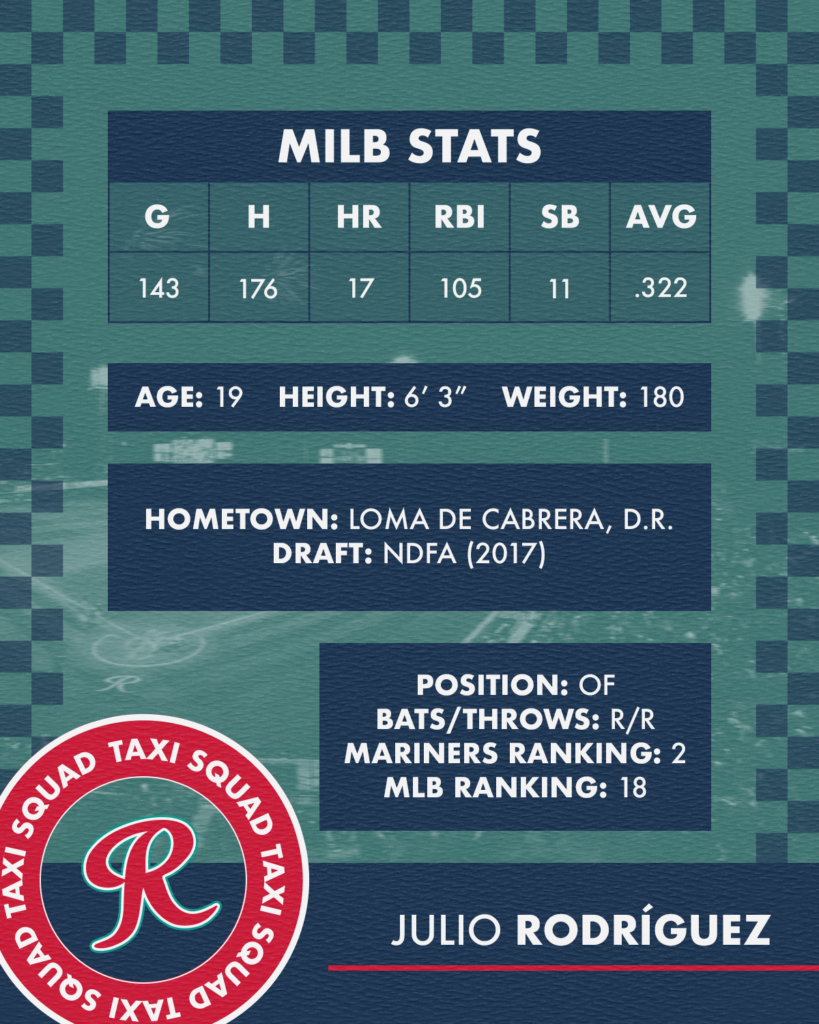 Lewis jumped on the scene last year with a Trevor Story-esque welcome to the Bigs. In case you forgot, he launched a homer in each of his first three games, and six in his first 10 contests. The 25-year-old was the No. 10 prospect on the Mariners Top-30 last year, but has not only been the top guy in Seattle so far this season, he has been one of the best in baseball through the first two weeks and still leading the league in hits (20) as of Aug. 7.

Jarred Kelenic has done nothing but rake in Tacoma, coming a triple shy of the cycle in an intrasquad game last week, and putting two massive home runs on Tightwad Hill on his first day in Tacoma.

Kelenic is currently the top prospect in the system, and for good reason, but it sure would have been fun to see Julio playing alongside him at R House this summer. The two are just a combined 40 years old, but could we be seeing a pair of future Hall of Famers patrolling the outfield in Seattle within the next couple years?

4. He could be the face of baseball

Every league could use that guy. A big smile, charismatic personality, likeable, but crucially – extremely talented.

Griffey was that guy. LeBron James and Patrick Mahomes are the dudes in their respective leagues. Does MLB have that guy right now?

We’ll leave that up for you to debate with your fellow fans, but nevertheless, Julio has potential to be baseball’s poster boy for the next generation.

He’s beloved among his teammates and coaches and he’s never seen without a smile on his face. And to go along with all that charisma, he’s got the tools to be a generational talent. It’s been a minute since the M’s have had the face of baseball in their clubhouse, and once all eyes are on Seattle again, Julio could be at the forefront of it all.

The pieces are finally falling into place. The Pacific Northwest has been waiting a long time to raise that coveted trophy, and the Mariners are closing in on it.

We get that it’s not easy to stay patient, but things are looking up, there’s a strong plan in place, and the guys that can do it are here.

You could jump on the bandwagon when the team starts to make a playoff push, but would you really feel like you were there for the journey?

Or, you can endure. You can watch guys like Rodríguez, Kelenic and Logan Gilbert as they climb the ladder. You can say, “I saw Julio Rodríguez put on a Rainiers uniform and dominate the PCL.”

Like life itself, the journey is just as important as the destination. So lock in, because you’re going to see some special things between now and the moment when the Mariners hoist that long sought after World Series trophy.

We’ll keep you updated on the Taxi Squad as they stay game-ready for their chance with the Mariners in this year’s abbreviated season. For the latest and greatest on the Taxi Squad, the Tacoma Rainiers and all things Cheney Stadium and South Sound culture, follow us on Twitter, Facebook and Instagram, and sign up for more at WeRTacoma.com.