The Seattle Mariners have been at Cheney Stadium for two weeks now, and they’re splendid guests, although they play a lot of baseball in the house which Mom never allowed.

When baseball awoke from its coronavirus catnap, nobody was quite sure what to expect. Could starting pitchers go deep into games from Opening Day? Would COVID make the abbreviated season even shorter? Would all those cardboard fans deteriorate in the rain like the Wicked Witch of the AL West?

To be honest, even when the Taxi Squad arrived in Tacoma we weren’t quite sure what their workouts and intrasquad games would look like.

Two weeks in, we think we’re up to speed. Here’s what we’ve seen so far from the alternate training site.

Let’s get the obvious out of the way first. If you’ve been following along on the Tacoma Rainiers social media channels, you’ve seen the highlights. The dude mashes taters like a seasoned vet.

We’ve also seen one outfield assist from the five-tool prospect as he cut down teammate Cal Raleigh trying to score a on a single to center.

#Mariners draft pick Zach DeLoach knocks a single into center with the bases loaded. That’s Kelenic throwing out Raleigh at the plate. pic.twitter.com/SOoGF4XEuA

Kelenic turned 21 midway through the Mariners Summer Camp, and there was already dialogue happening on the scariest place on Earth, the Internet, about whether MLB Pipeline’s No. 12 overall prospect had earned that 30th roster spot on Seattle’s roster.

As expected, though, the M’s want the former Team USA standout to get more ABs against quality arms in Central Tacoma before forcing him into The Show. Through two weeks, Kelenic has surely gone above and beyond anyone’s expectations.

He can play. The question is, where will he be playing at the end of September?

They’re taking advantage of the situation

When the season was halted, a major concern on the player development front was that young players like Kelenic, Noelvi Marte and Cal Raleigh would be missing out on the 400-ish plate appearances that they would’ve had during a traditional Minor League Baseball campaign.

It was clear from day one in Tacoma that, although these players are only getting about two months of training in, they’re going to make up ground quickly. 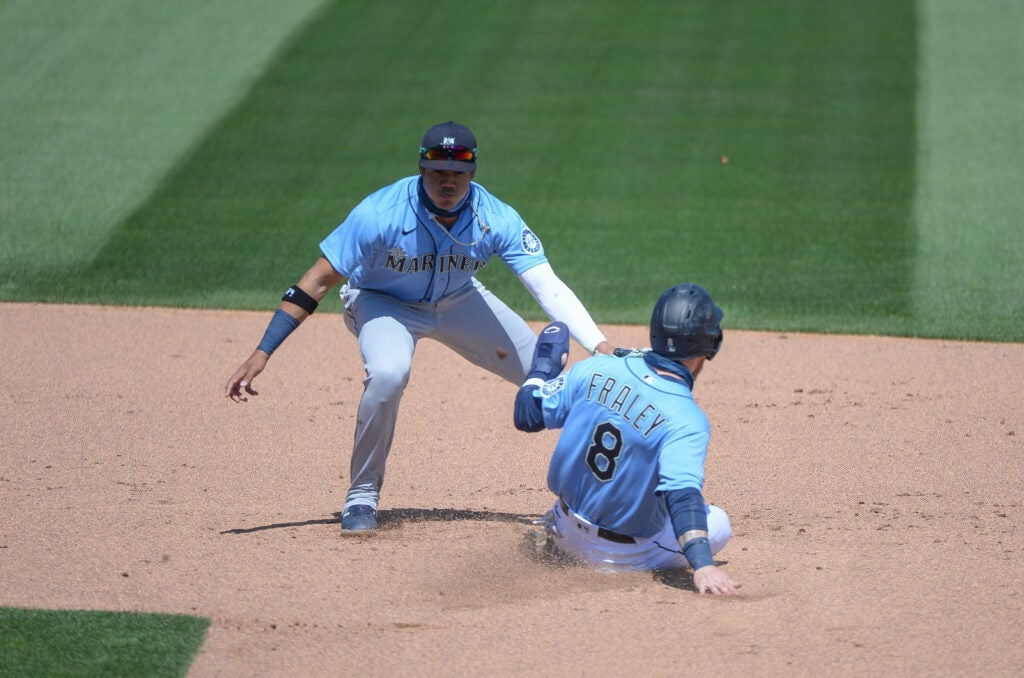 The intrasquad games aren’t 9-on-9. They’re more 5-on-5, with coaches permanently playing in the field. The games last anywhere from 4 to 8 innings, which leaves time for the hitting prospects to get anywhere from 6 to 8 plate appearances. That’s essentially two full games of live at-bats against talented arms every time out.

The downside is that hitters will be seeing the same 15 pitchers all summer, and vice versa, but for a young pitchers like Emerson Hancock and George Kirby, they’re seeing MLB ready players including Jake Fraley, Braden Bishop and Jose Marmolejos rather than the still-developing hitters of lower level minor league clubs. Think quality over quantity, but also more quantity than you’d expect.

There’s no absence of intensity

Look, you’ll never be able to replicate 7,000 Rainiers fans cheering on a warm Friday night under the Cheney Stadium lights. But that doesn’t mean these guys aren’t getting amped up for these intrasquad contests.

For about half of the Taxi Squad players, they’re an injury, a hot week at the plate or a great outing on the mound away from getting that call of a lifetime. These games matter to these players, and they’re battling every day.

In week one, there was a 17-pitch showdown between pitcher Erik Swanson and infielder Austin Shenton. With every pitch that Shenton fouled off, the energy on field level only grew. Players shouting from the dugouts, encouraging each of their teammates to keep competing. Swanson and Shenton were locked in, entirely focused on how to best the other.

Swanson eventually won the matchup, striking out the young Spokane native, but it was a wake-up call to us that these guys aren’t just going through the motions, they’re getting after it.

There’s still a month and a half of action at R House. We’ll keep you updated on the Taxi Squad as they stay game-ready for their chance with the Mariners in this year’s abbreviated season. For the latest and greatest on the Taxi Squad, the Tacoma Rainiers and all things Cheney Stadium and South Sound culture, follow us on Twitter, Facebook and Instagram, and sign up for more at WeRTacoma.com.

Rainiers Pick Up A Win Reminiscent Of Last Year’s Team